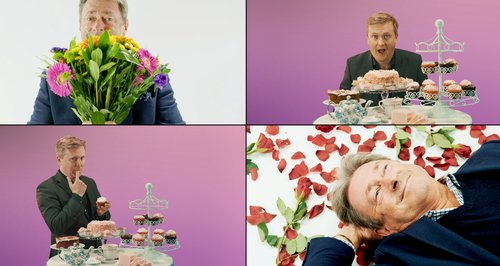 Our very own Alan Titchmarsh and Aled Jones have joined forces with other stars including Chris Moyles, Stephen Mulhern and Marvin Humes to recreate Charli XCX's 'Boys' in spoof video in aid of Global's Make Some Noise.

In support of the campaign, Charli XCX has provided newly recorded vocals especially for the video, replacing her original lyrics “I was busy thinking ‘bout boys” with “I was busy making some noise” in reference to Global’s Make Some Noise charity, which gives a voice and a lifeline to small projects that are doing inspiring work to help disadvantaged youngsters, but are struggling to be heard.

Global’s take on the iconic music video opens with Classic FM’s Alan Titchmarsh peeking at the camera from behind a bunch of flowers, then later Classic FM’s Aled Jones throwing cake at the camera. The homage also features Heart’s Mark Wright showing off his keepie-uppie skills, Capital’s Roman Kemp rolling around with a cute French bulldog, and Radio X’s Chris Moyles getting tangled up in some balloon letters. Other scenes show Capital’s Marvin Humes lifting some weights before pouring water all over himself in homage to Jack Antonoff’s cameo in Charli XCX’s video, Capital XTRA’s Tim Westwood spraying silly string against a graffiti backdrop and Heart’s Stephen Mulhern performing a card trick.

Global’s Make Some Noise gives a voice and a lifeline to small projects that are doing inspiring work to help disadvantaged youngsters, but are struggling to be heard. The grant-giving charity gives these initiatives a platform to tell their story, helping youngsters who are living with illness, disability or lack of opportunity. Since 2014, Global’s Make Some Noise has raised more than £7 million and promoted 135 incredible charities and projects. Global is home to the country’s most loved commercial radio brands including Heart, Capital and Classic FM, and together its media brands reach more than 30 million people every week.

> To find out how to join in and raise money, and to download the dress loud pack go to makesomenoise.com