Listen to Brooklyn Duo's beautiful cover of 'Castle On The Hill' 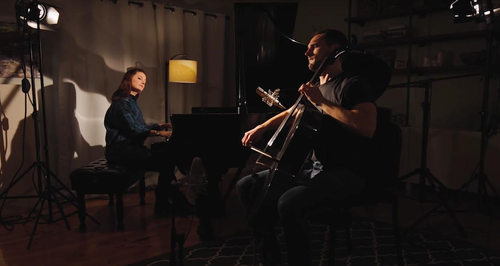 Your day is about to get so much better thanks to Brooklyn Duo's take on the new Ed Sheeran single.

YouTube sensations Brooklyn Duo just keep on giving the internet what it wants - some of the catchiest pop songs turned into classical hits.

Ranging from their stirring classical rendition of Leonard Cohen's 'Hallelujah' to a classical cover of 'Take On Me' full of pure joy, the piano and cello duo are unstoppable.

Their latest video, the first in a while without any special guests, is of Ed Sheeran's hit 'Castle On The Hill', which debuted in the UK chart at no. 2, and we think the sound and range of the cello imitates Ed Sheeran's voice perfectly.

Ed Sheeran's hit "Shape of You" also debuted the same week at no. 1, making him the only artist in UK chart history to debut in the top two positions in the same week, so we're secretly hoping 'Shape of You' will be Brooklyn Duo's next cover!

Here's a sneak preview of 'Castle On The Hill':