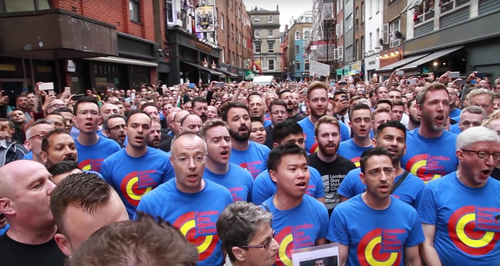 The choir, who performed an a cappella version of the Simon and Garfunkel song at a vigil in Soho, have announced they will be releasing the song as a digital download.

Earlier in the month, members of the LGBT community held a vigil on Old Compton Street in Soho. Hundreds of people gathered for the victims of the horrific shooting at a gay nightclub in Orlando on Sunday.

London’s Gay Men’s Chorus, at the heart of the crowd, performed an a cappella version of Simon & Garfunkel’s ‘Bridge over Troubled Water’. The whole moving performance was filmed and posted on YouTube:

Now the choir have announced they will be releasing the song as a single. All proceeds from the sales of the single will be split between the Pulse Victims Fund, Equality Florida, and Galop, a charity that works to combat LGBT hate crime in the UK.

Soprano Joyce DiDonato also posted a tribute to the victims of the attack earlier in the week.

Simon Sharp, the artistic director of the choir said: “We were truly overwhelmed by the public response to our performance at the Soho vigil and want to do everything we can to raise money for the victims of the Orlando attack and for victims of LGBT hate crime in the UK.”

The song will be available on iTunes, Amazon, Google Play, Spotify, Deezer and Tidal.