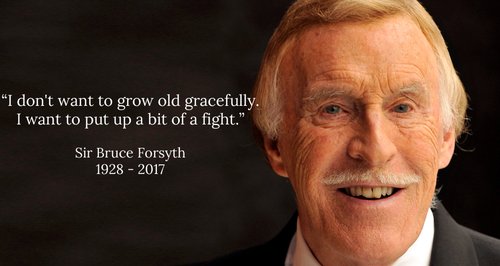 Sir Bruce Forsyth, one of the UK’s most recognisable and best-loved television presenters and entertainers has died at the age of 89.

Sir Bruce was best known in recent years as one of the presenters of Strictly Come Dancing, which he fronted 2004-2013.

But he was a familiar face on British television, complete with his catchphrases ‘Nice to see you, to see you nice’ and ‘Didn’t he do well?’.

Sir Bruce was born in Middlesex to a family who owned a car repair garage. His parents were both musical – his mother was a singer and both parents played brass instruments in the Salvation Army.

He was inspired to go into the performing arts after watching films starring Fred Astaire and trained as a dancer and entertainer before first appearing on stage at the age of 14 – in his act ‘Boy Bruce, the Mighty Atom’.

In 1939 he first appeared on the medium that would become his home: television. He travelled around the country performing throughout the Second World War – even appearing at circuses as a strong-man.

But it wasn’t until 1958 that his television career really got off the ground with a job compèring Sunday Night at the London Palladium.

The song appeared on one of the handful of recordings Sir Bruce released over his lifetime, including The Musical Side of Bruce in 1973, Come Get It! in 1979 and, most recently These Are My Favourites in 2001.

As his fame increased, he even appeared on The Muppet Show, riffing with Statler & Waldorf (at 11mins in).

While other presenters from his generation were starting to enjoy retirement, Brucie, as he was affectionately known, returned to the small screen for a high-profile presenting job as the co-presenter of Strictly Come Dancing.

Sir Bruce is one of the most feted presenters of all time: to name just a few, he was awarded the Royal Television Society Lifetime Achievement Award in 2009, made a Fellow of BAFTA in 2008 and carried the Olympic flame in 2012.

He also holds the Guinness World Record for the longest television career by a male entertainer and has released a handful of albums of music, including 'These Are My Favourites', released in 2011.

He is survived by his third wife, Wilnelia Merced, who he married in 1983, six children, nine grandchildren and three great-grandchildren.