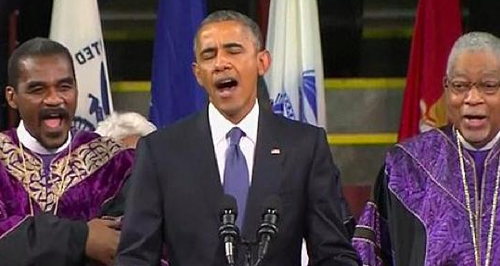 Charles Miller Jr has said he was taking a "cue from God" when he began to spontaneously play under the US President's address to mourners in Charleston on Friday.

A speech from Barack Obama last week was made all the more powerful by an act of spontaneous music-making. The US President was giving a eulogy for South Carolina state senator, Reverend Clementa Pinckney who was among nine churchgoers killed in Charleston this June.

Towards the end of his address to the mourners, Obama began singing the hymn Amazing Grace. He then read the names of those killed in the attack. During this Charles Miller Jr, the church organist, continued to play, interjecting the President's speech with short motifs – something that is usually reserved for preachers.

Following the service, Miller spoke about improvising under the President's speech. “I was taking my cue from God, literally,” the organist said. “In the black tradition, when a lot of preachers get to the end of their sermons, the musicians come in and assist with the message"

Referring to events of the past week in Charleston, Miller said: “Nothing can undo what took place. But what has come out of it has been eye-opening and so uplifting. When everyone unites in one place with one voice, great things happen.”