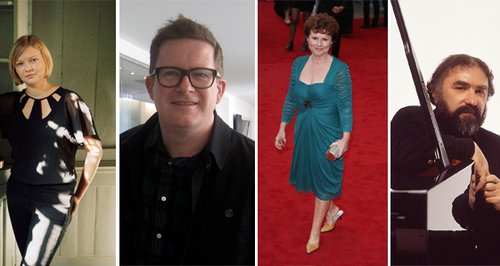 The choreographer Matthew Bourne, violinist Alina Ibragimova and pianist Radu Lupu are just some of the figures from across the classical music world honoured this New Year.

Choreographer Matthew Bourne has been knighted in this year's New Year Honours list. His ballets include a version of Tchaikovsky's Swan Lake in which the swans are danced by men, an updated version of Sleeping Beauty, and The Car Man, a re-telling of Bizet's Carmen set in 1960s America.

Pianist Radu Lupu has been made a CBE, along with ballet dancer and artistic director of English National Ballet, Tamara Rojo.

The pianist Malcolm Martineau is made an OBE, alongside conductor Steuart Bedford.

Violinist Alina Ibragimova has been made an MBE alongside Milena Lady Grenfell-Baines, a patron and fundraiser for the Royal Liverpool Philharmonic Orchestra, Classic FM’s Orchestra in North West England. Michael McCarthy and Michael Rafferty, co-founders of Music Theatre, Wales have also been recognised with an MBE apiece.

Other figures from the musical world to be recognised include violinist Catherine Arlidge, who becomes an MBE; Leslie East, the former chief executive of the Associated Board of the Royal Schools of Music, who becomes an OBE, and David Joseph, the chair and chief executive of Universal Music. Jill Tookey, founder and artistic director of National Youth Ballet of Great Britain, is made a CBE.

In other artistic fields, actress Barbara Windsor becomes a dame, as does the Welsh actress Siân Phillips.

Actress Imelda Staunton becomes a CBE and Idris Elba is made an OBE – along with singer-songwriter Damon Albarn, the lead singer of British band Blur.