Watch a man play the saxophone while undergoing brain surgery 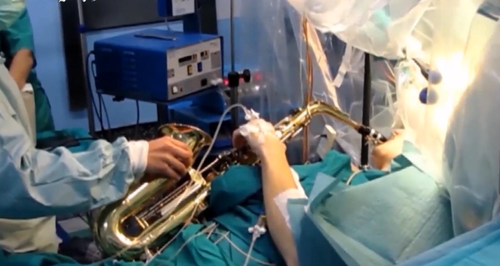 Doctors in a hospital in Spain asked their patient, Carlos Aguilera, to play his saxophone when he underwent surgery to remove a brain tumour – and filmed while he played

A young musician was asked to play his saxophone during part of a 12-hour operation in Spain. The team of 16 surgeons wanted to monitor Carlos’ brain function.

Carlos was awake during the operation so doctors could monitor his speech, hearing and movement (as well as saxophone playing).

The piece he chose to play was the jazz classic ‘Misty’ written by Erroll Garner:

It's not the first time surgeons have asked musicians to perform during brain surgery. A tenor undergoing an operation in Utrecht sang part of Schubert's Winterreise – and one of the team of doctors filmed his performance.