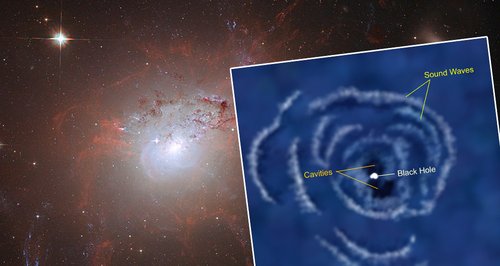 The supermassive black hole in the centre of the Perseus cluster of galaxies was known to create a huge amount of heat and light, but in 2003 Nasa’s Chandra X-ray Observatory detected soundwaves from the object as well.

Scientists worked out that the sound the black hole was making was in fact a B flat – though it’s far, far below the human range of hearing (a million billion times deeper, in fact).

Where is this black hole?

The Perseus cluster of galleries is 250 million light years from Earth. The ripples detected by Nasa’s Chandra were evidence of sound waves that have travelled hundreds of thousands of light years from the black hole at the cluster’s centre.

Steve Allen of the Institute of Astronomy in Cambridge said: "The Perseus sound waves are much more than just an interesting form of black hole acoustics. These sound waves may be the key in figuring out how galaxy clusters, the largest structures in the Universe, grow."

Here's an artist's illustration of the sound waves in the hot gas in the Perseus cluster. 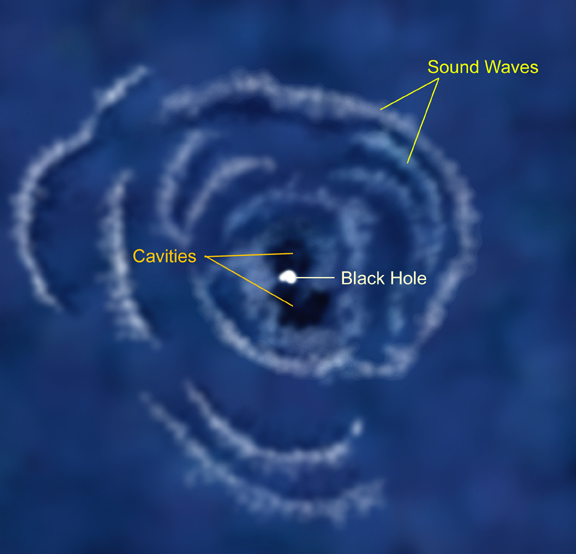 The sound waves solve a bit of an astronomical conundrum

“For years astronomers have tried to understand why there is so much hot gas in galaxy clusters and so little cool gas. Hot gas glowing with X-rays ought to cool because X-rays carry away some of the gas' energy. Dense gas near the cluster's center where X-ray emission is brightest should cool the fastest. As the gas cools, say researchers, the pressure should drop, causing gas from further out to sink toward the center. Trillions of stars ought to be forming in these gaseous flows.

“Yet scant evidence has been found for flows of cool gas or for star formation. This forced astronomers to invent several different ways to explain how gas contained in clusters remained hot. None of them were satisfactory.

“Black hole sound waves, however, might do the trick.”

From the size and shape of the cavities scientists could tell that the B flat travelling from the black hole has remained constant for about 2.5million years.