The wrong violinist went on stage to collect an award... and it was awkward 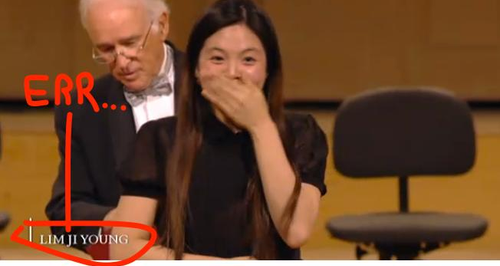 The competition, which features an international jury of classical music influencers (including Daniel Hope, otherwise known as the only man capable of successfully wearing a leather jacket mid-Vivaldi), was won by South Korean violinist Lim Ji Young.

However, Lysebeth pronounced her name in a less-than-intelligible fashion, and fellow finalist Lee Ji Yoon mistakenly took the stage to claim the prize (which wasn't hers).

It was basically a nightmare

This is Lee Ji Yoon (she did not win, but thought she did).

THIS IS NOT LIM JI YOUNG.

This lady knew what was going on

Thank goodness for this lady. She is the harbinger of panic, the destroyer of calm, the bearer of disappointing news.

This guy is so terribly sorry and awkward

Can you IMAGINE what it must be like to be him at this instant:

But it's OK. The real winner was quickly announced.

Her sails. The wind has gone from them.

Even Daniel Hope is feeling weird about it

If the coolest violinist in the room is feeling weird, you know something's gone wrong.

You can watch the whole thing here: