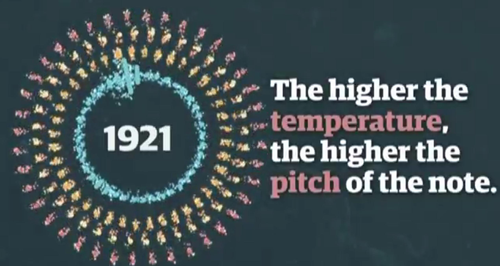 Climate change is a much-debated topic with a few vocal critics still denying the effects of global warming - maybe this one-minute symphony will change their minds.

The Guardian has come up with a scientific symphony based on the increase in temperatures and carbon in Earth’s atmosphere.

Each year since the late 19th century is assigned a note based on temperature and carbon presence, with the notes becoming higher and louder as both of those metrics increase as the decades roll on:

Perhaps unsurprisingly it's not the most generically melodic of pieces, but it's a clear and effective display of how our planet is changing - all thanks to music.