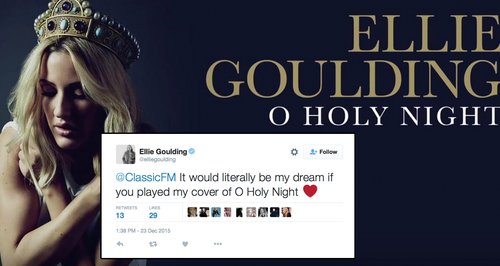 The electro-pop sensation has recorded a festive treat for her fans, and she wanted Classic FM to play it too.

It was just an ordinary day on Classic FM Requests with Anne-Marie Minhall, until this tweet came in:

No, it wasn’t a message from Edmund Goulding, the little-known film music composer - it was from pop superstar Ellie Goulding, who wanted us to make her dream come true by playing her version of the Christmas classic ‘O Holy Night’.

Coming up before 3pm, @elliegoulding. Dreams *can* come true - particularly at Christmas

Here's the moment when Anne-Marie Minhall chatted to Ellie herself to tee it up:

Ellie told Anne-Marie about how much she loves listening to Classic FM (*blushes*): “I’m listening to it now while attempting to make some sort of bread pudding type thing for Christmas. It really relaxes me and makes me feel very zenned out.”

@ClassicFM @elliegoulding I, too, am now Zenned out. Lovely rendition. Thank you and merry Christmas to you both

@ClassicFM @elliegoulding That was everything.