Another precious instrument has been seriously damaged during a flight 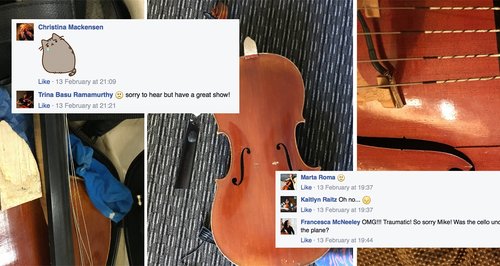 Cellist Mike Block was about to perform a sold-out show in Portland, Oregon, when he realised that this had happened to his beloved cello.

Block opened the case to find a whole heap of damage had been done at some point during his flight on Southwest Airlines:

Excited for my second SOLD OUT show in a row here during this trip to Portland, OR! The only downside to this trip is...

After receiving some repairs from a local luthier and borrowing a replacement instrument, Block then continued on to San Diego. Unfortunately, his cello suffered another injury on the way:

Cello was too weak to make it to San Antonio and is now headless again ... Heading to Terra Nova violins to get a loaner...