You can now play a piano duet with your computer 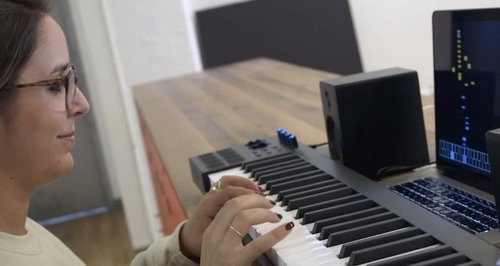 Through machine learning, specifically neural network technology, a computer can now respond musically to a melody played on your keyboard.

The system, called 'AI Duet', created by Yotam Mann, and Magenta and Creative Lab teams at Google, uses neural network technology to educate itself about musical concepts. This results in the computer creating a map of notes and timings, which it uses to respond to melodic inputs played by a user.

‘It’s just one example of how machine learning can inspire people to be creative in new ways’, Yotam explains. ‘We played the machine lots of examples of melodies. Over time, it learns these fuzzy relationships between notes and timings, and creates its own map based on the examples it’s given.'

‘So in this experiment you play a few notes, they go to the neural net, which basically decides, based on those notes and all the examples it’s been given, some possible responses.

‘It picks up on stuff like key and rhythm that you’re implying, even though I never explicitly programmed in the concepts of key and rhythm.’

The possibilities are endless - you can play just a few notes and see how the computer responds, or you can create loops, or even 'just mash the keyboard – the neural network tries to return something coherent from anything that you give it.’

And the best part: 'You don’t even have to know how to play piano—it’s fun to just press some keys and listen to what comes back.'

Check out the video below to hear the melodies created by AI Duet, or why not give AI Duet a go yourself.