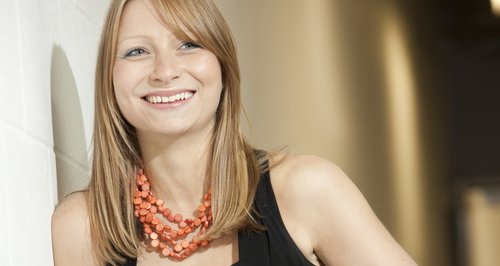 Charlotte Bray is one of the most exciting composers in music today. Her new piece Perseus has been recorded by Guy Johnston and will be released later this year, so we took the opportunity to speak to her about Bach, black holes and the need for more female role models

How did you become a composer?
We did lots of music at school and during my teens I was in orchestras and when to music centres. But at school I’d found with GCSE and A level music that the composition we did, was in the style of Mozart or Haydn – having to write music in a very specific style and correct musically, which of course is great training. But it’s not really a way in to creativity.

When I went to university I wasn’t really sure what direction to go in, but music was my passion. So I went to Birmingham Conservatoire to study cello. It was two years into the course when I realised that I was really enjoying composition. Within a few months I had an interview to change course and took a wild leap into composition. I’m very glad I made that slightly wild decision because that was really the beginning of me as a composer.

What advice do you wish you’d been given?
I don’t know if it would have made a difference but it’s much more talked-about that there should be female role models out there for young girls who want to compose, because I hadn’t really even considered that it could be a career path. It wasn’t ever talked about. Although I don’t regret coming to it quite late because I think it can be incredibly difficult for teenagers who are under huge pressure to do well at school. I don’t regret not having that kind of pressure because I’m not sure that in the long run that it’s helpful. And I found my way to being a composer and having a career and having a career as a composer.

What piece of advice would you give to someone who wants to become a composer?
Just keep writing, keep writing as much as possible. And through that you’ll find out which direction you’re going. For me it’s a way of expressing myself, so each piece feels very different, and I think that keeps it alive for me.

Which piece are you most proud of?
There’s a special place in my heart for all my pieces. But I feel very grateful for my relationship with cellist Guy Johnston. I find him a very special artist in the respect of building collaboration with composers and being an advocate for new music. There are so many great cellists but I think what Guy’s trying to do is really visionary and unique.

Tell us about Perseus, the piece you’ve written for Guy’s new album.
Guy wanted to commission pieces to celebrate his cello’s 300th birthday (it was made in 1717 by David Tecchler). He told me a bit about the cello – where it was from, when it was made, who it was made by. And then he said “take whatever you like from that, or not, and go in any direction you want.”

I was finding it quite hard to break into the piece so I started to come up with motifs that came from the name David Tecchler, there’s lots of doubling of letters there – Cs and Ds and Es – so that gives you quite a distinct flavour.

It might sound quite abstract but to me these ideas came quite clearly: perhaps you have stars that are very far aware and you’re floating out in the galaxy, or at times you’re zooming into this source of light and energy and you’re much closer. It’s about perspective when I’m thinking about these things creatively: where are you in relation to it? Where are you in the galaxy or in this picture that represents that?

Some of your pieces have had a very contemporary inspirations – like your cello concerto Falling in the Fire. What role do you think music can have politically?
I find it a very worrying time – we’re in the hands of these politicians. I wouldn’t claim to have an answer. I hope that music will unify us and pull different people together but I’m not sure if that’s overly positive, I’m not sure it’s a realist view.

What do we get wrong when we talk about music, in the media?
Contemporary music is so broad and every composer is writing different music, so people might hear one thing and say “I don’t like contemporary music”, but of course there’s so much variety out there.

Listening to music takes so much concentration and a span of time that people don’t really seem to have these days – or maybe ever. It’s expected that we can listen to more music now because it’s recorded, whereas 100 years ago it wasn’t. But how many people go and sit and listen to music for any length of time without doing something else at the same time? The problem with contemporary music is it’s not background music.

Which composer would you most like to meet from the past and why?
I would choose to go all the way back and meet Bach because I find it fascinating how revolutionary he still is, really, yet in his time he was writing music purely because it was his job and his calling for the church. Yet the music we have from him pushed so many boundaries. He must have been such a fascinating person to have achieved everything he achieved – writing music for a job and then coming home and thinking ‘I’m going to write a Prelude and Fugue in every key on this new keyboard’.

Find out more at Charlotte's website – her piece Perseus will appear on Guy Johnston's album 'Tecchler's Cello: From Cambridge to Rome', which is out 8 September.