Aled Jones sang Walking in the Air at 18,000ft and surprised a plane full of passengers 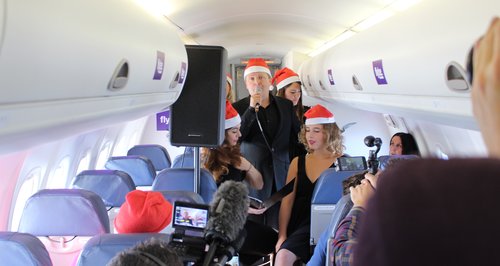 To launch his new album, One Voice at Christmas, the singer and Classic FM presenter surprised passengers on a London to Cardiff flight with a carol concert at 18,000ft

The passengers on the 9.45 flight from London to Cardiff this morning were surprised by a carol concert by Aled Jones mid-flight.

Having taken over the plane's sound system, Aled sang Silent Night, Away in a Manger and the song which launched his singing career as a boy, Walking in the Air.

The concert was to mark the launch of his new CD, One Voice at Christmas, on which he sings with his younger self on tracks including O Holy Night, Little Road to Bethlehem and, of course, Walking in the Air.

A carol concert in the sky to launch Aled Jones' new album One Voice at Christmas! #singingintheair #london #cardiff #christmas

Speaking immediately after the concert, Aled said: "Just when you think you've done everything! Along comes a trip on an aeroplane to sing Walking in the Air at 18,000ft! That was the weirdest performance I've ever given in my life – the most thrilling and exciting, it was definitely a journey into the unknown! But it was really great, seeing everyone with their santa hats on, singing Away in a Manger in October – there was a lot of joy on there."

The release of the Christmas-themed album follows the success of One Voice, which came out in April this year and spent 13 weeks at No.1 in the classical chart.

You can see more on Classic FM’s Snapchat (classicfm) and the album is available to pre-order on Amazon now.