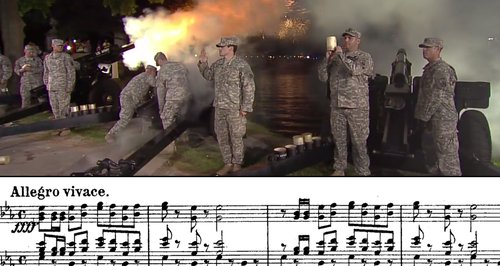 Cannons, drums... and paper bags? These are the most overblown and gunpowder-tastic renditions of Tchaikovsky’s masterpiece.

In The Sunday Times Brie Larson talks about her role in Free Fire, a new thriller about a gun deal gone spectacularly, explosively wrong. Well, it's not the first time explosives have been used for entertainment...

Tchaikovsky penned the 1812 Overture in about six weeks to commemorate the Russian victory over the French at the battle of Borodino. He famously hated the work, describing it as ‘very loud and noisy and completely without artistic merit.’
He’s not all wrong.

The 1812 Overture certainly is loud and noisy, but it surely isn’t completely without artistic merit. It’s since gone on to be one of the most famous pieces of orchestral music of all time, and you need more than just a few loud bangs to earn a place in the *canon* (sorry) of symphonic repertoire…

It’s sensible to have the canons outside, right? Well don’t tell health and safety, but it’s so much more fun when they’re indoors. Listen to the audience scream at this performance of the 1812 Overture at the Royal Albert Hall:

Budget can sometimes be an issue. Cannons don’t come cheap, and common replacements include rifles, amplified cap guns, or bass drum and gong. More unorthodox performances have included celery stalks snapping loudly (Ernie Kovacs) and this version with paper bags by TunED Up and the Sydney Symphony Orchestra:

As if the finale to the 1812 Overture doesn’t come as a big enough surprise, Spanish orchestra Banda Simfònica d'Algemesí decided that they would FLASHMOB it. Skip to 4:50 for a very big drum:

And there are always those times when you think, "you know what? I’m not sure that cannons are enough."Try this version by the Boston Pops Orchestra, complete with cannons AND a firework display: