Diana and Pavarotti: why was Luciano her favourite tenor? 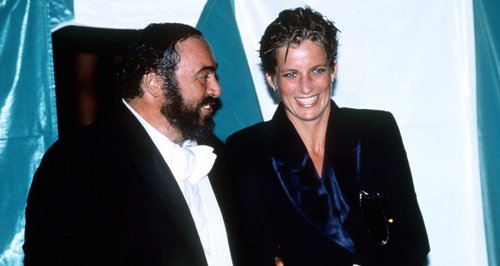 She was a regular fixture at his concerts, but what was it about Luciano Pavarotti that made Diana, Princess of Wales such a fan?

The Sunday Times took a look at how Diana's fashion choices influenced a generation and led to a new exhibition being opened - but we're interested in another of the Princess' interests, namely opera.

There’s an iconic image of tenor Luciano Pavarotti and Diana, Princess of Wales: he looking fresh and invigorated after an open-air performance in Hyde Park, she looking absolutely soaked through with rain because she’d been watching said performance.

She looks absolutely charmed, no doubt because the legendary tenor had just dedicated a Puccini aria to her in front of hundreds of thousands of people:

Taken in 1991, at the height of Pavarotti’s career, the photo shows just how easy they were with each other from the off. It’s telling that in the years that followed, Pavarotti would campaign for Diana’s chosen charitable cause, the elimination of landmines worldwide.

Diana first became a fan of the great tenor’s when her husband, Prince Charles, insisted they watch Pavarotti in a performance of Verdi’s Requiem in Verona. It was to be the first of many such encounters and, naturally, Pavarotti’s voice won her over.

Besides their shared interests, it’s easy to see why the two of them got along so well. They moved in the same circles and, perhaps more than other celebs in their ‘world’, they found the whole thing a tiny bit silly, sharing a sense of humour.

In a hilarious extract from his autobiography, Pavarotti fondly remembers a meal the two of them shared. Diana ordered prawns. Luciano told her that they looked delicious. They looked so delicious, in fact, that he told her again. Giving up, he finally said to her, “Listen, I tried twice with no success. Now I ask you directly. May I have one of your shrimp?”

After Diana’s death in 1997, Pavarotti was asked to perform at the funeral. He was so overcome with grief that he initially declined even to attend the event, let alone perform. But he eventually decided he would come purely as a guest rather than a participant, although he was visibly shaken.