This is the Pope’s favourite music 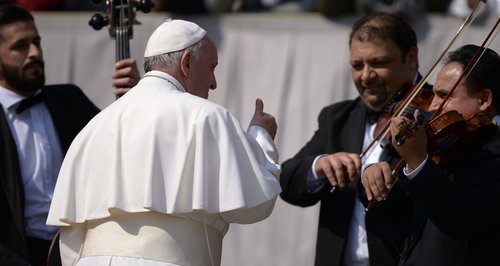 You can tell a lot about a person from their record collection, and the Pope is no different.

In The Sunday Times you'll find an in-depth profile of the Pope delves into the life of this most unconventional of religious figures. Getting to know the head of the Catholic church is one thing - but we think a quick look at someone's record collection can throw up some interesting nuggets...

We’ll get on to talking about his record collection in just a moment, but did you know that Pope Francis has actually released his own prog-rock album? It’s called ‘Wake Up’:

It’s fun to imagine the divinely appointed head of the Catholic Church laying down some epic tracks for the Papal Record Label, but unfortunately his holiness does not actually sing on his album. Instead, his spoken speeches are sampled into the music.
But when he’s not going about his Papal duties, you’ll be glad to hear that his musical tastes epitomise his cool, inclusive and open minded attitude.

The least surprising appearances on the saintly shuffle are Mozart and Bach. His holiness is a fan of all things classical, and he’s called Bach’s Mass in B Minor and Mozart’s Great Mass in C Minor ‘sublime’ and ‘unsurpassable’.

He clearly has great taste - the B Minor Mass is widely considered to be Bach’s crowning work, and the Mass in C, (which is one of Mozart’s last works, succeeded only by his Requiem, which was left unfinished at his death), is one of the composer’s most personal interactions with God, since he wrote it without a commission after he had left Salzburg Cathedral:

You might be surprised to hear that Wagner makes an appearance on the list of composers which Pope Francis admires, and he’s also a massive fan of the conductor Wilhelm Furtwängler, who specialised in conducting his music. Furtwängler’s recording of the ring cycle is his favourite, and the German Chancellor Angela Merkel presented him with an enormous box set of the conductor’s studio recordings when she visited the Vatican in 2013:

Not all the pope’s tastes are classical. In 2014 the Holy See invited the ‘godmother of punk’ Patti Smith to perform at the Vatican Christmas concert - on the express invitation of the big man himself.

This is quite a shocking choice since Smith does not personally identify as Catholic, and many of her lyrics have been called blasphemous because of their subversive use of Catholic imagery. However, Patti Smith is also a tremendous advocate for social justice, and Pope Francis appears to have seen a deep link between her values and the church’s core mission of seeking to promote a peaceful world:

Last but not least: Tango! The Holy Father is true to his Argentinian roots, and underneath his stately vestments tango runs in his blood. He’s very fond of the South American genre, and some of his favourite artists are Carlos Gardel and Ada Falcon: