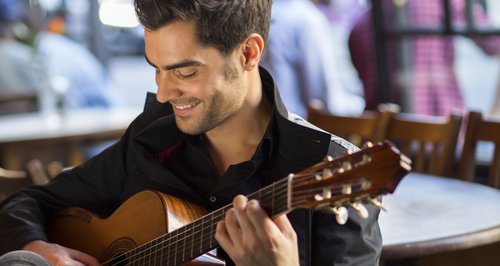 One of the world’s hottest classical talents will make a triumphant return to the Royal Albert Hall in November, accompanied by the English Chamber Orchestra Ensemble for an eclectic show showcasing everything from Bach to the Beatles.

Miloš Karadaglić, the first artist to ever perform a solo guitar recital on the Hall’s famous stage, will also perform music by Manuel De Falla, Joaquín Rodrigo and Astor Piazzolla in this special one-off show in November.

Miloš made his Hall debut in the venue’s secondary space, the Elgar Room, in February 2012, returning to headline the auditorium just seven months later, following a meteoric rise. This much-anticipated show will see him confirm his status as one of the world’s most important classical musicians.

Lucy Noble, Director of Events at the Royal Albert Hall, said: “We are incredibly excited to be welcoming back this remarkably talented musician and incredible stage performer. Miloš has a very special relationship with the Hall that makes his appearances here truly unique, and we can’t wait to welcome him back for a wide-ranging and ground-breaking recital.”

He will also be working with the Hall’s Education & Outreach department to help inspire the next generation of musicians.

Acclaimed by the Sunday Times as simply “the hottest guitarist in the world”, Miloš was born in Montenegro in 1983 and began playing the guitar aged eight.

He moved to London at 16 to study at the Royal Academy of Music and has since performed with many of the world’s finest orchestras, from the Chicago Symphony to the Los Angeles Philharmonic and the Orchestra of the National Academy of Santa Cecilia in Rome.

His first main stage performance was part of the Albert Sessions initiative, which enables young, world-class artists who haven’t headlined the Hall before to showcase their talents on the main stage, as well as hosting a workshop for local teenagers as part of the Hall’s extensive Education & Outreach programme.

Miloš will perform with the English Chamber Orchestra Ensemble, directed by Stephanie Gonley in November in a programme that also includes music by Manuel De Falla, Joaquín Rodrigo and Astor Piazzolla.

For tickets, go to the Royal Albert Hall website.