What makes the perfect piece of classical music? 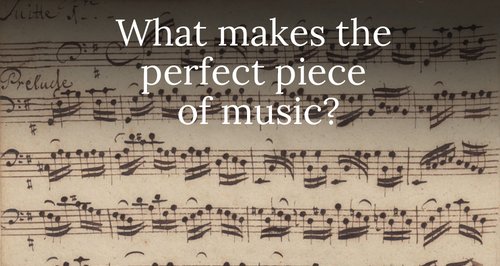 We’re on the hunt for the goldilocks of classical music – not too long, not too short, with just the right number of musicians and a hummable tune…

What makes the perfect piece? Not the best technically speaking, not the most revolutionary, not the most jaw-dropping, but the metaphorical goldilocks of pieces – just right by all standards.

This Wednesday, Jane Jones hosts a Full Works Concert exploring this question. Here’s what she thinks makes the perfect piece:

“Does it have the emotional power to connect with the listener – and is it widely loved regardless of stated musical preference? Those would be my criteria for ‘perfect’ – evocative and emotional, complete with drama and tension as the music builds – released ultimately in a wonderful resolving climax.

After much scientific analysis* here are our five candidates for the perfect piece. And we want to know what you think – leave your suggestions for what makes the perfect piece, and any examples, in the comments below.

The beautiful simplicity of Satie’s tranquil piano piece means it is probably one of the most deceptively easy pieces ever written. There may be very few notes actually on the page, but that means it asks even more of the performer. And although the first half is all tranquillity, the second moves into much spookier territory. You can read more about exactly why it’s one of the masterpieces of the piano, here.

Writing in The Guardian, Tom Service said that this symphony “is written at the furthest edges of the possible for Mozart”.

Today, it may have lost its revolutionary edge, but it is a strong candidate for the most perfect piece ever written. It’s around 35 minutes – long enough for Mozart to have plenty of fun with his musical ideas – and contains some of the composer’s most famous tunes.

Of course the perfect piece needn’t be orchestral. What Bach’s Cello Suite lack in number of instruments, they more than make up for in emotional depth and scope.

There are six suites and each contain six movements. It’s (just about) possible to listen to them in one sitting but they are also perfectly bite-sized so you can dip in for a daily dose of Bach.

Amazingly, the suites weren’t widely known until the great cellist Pablo Casals rediscovered and started performing them in the early 20th century. Since then they’ve become the crowning achievement for any cellist.

The Third is often overshadowed by the showy Ninth and the show-stealing Fifth. But the Third has that goldilocks-factor. It’s the perfect length – just shy of an hour in most performances – and managed to fundamentally redefine what a symphony could be. There’s even a funeral march thrown in.

It’s full of audacious ideas (one of which Berlioz called a “whim of absurdity”), many of which shouldn’t work, but all of which do, because Beethoven was an utter genius.

Messiaen’s Quartet for the End of Time

Something else that just shouldn’t work (but does): Messiaen’s quartet for clarinet, violin, cello and piano.

The extremely unusual combination of instruments came about because Messiaen wrote the piece during his time as a prisoner-of-war at Stalag VIII-A in 1941. Among his fellow prisoners were a clarinettist, a violinist and a cellist (Messiaen took the piano part himself).

The result is one of the most heart-breaking, gripping and concise (the whole piece is around 50 minutes) explorations of what it means to be alive ever attempted. What more can you possibly ask of a piece of music?

The quartet opens with Messiaen’s imitation of a blackbird’s song. Here’s what the composer himself said about the opening:

“Between three and four in the morning, the awakening of birds: a solo blackbird or nightingale improvises, surrounded by a shimmer of sound, by a halo of trills lost very high in the trees. Transpose this onto a religious plane and you have the harmonious silence of Heaven.”