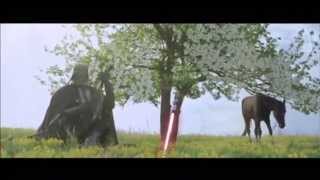 The Internet Party of Ukraine, which aims to create an electronic government in the country, has released a party political broadcast starring Darth Vader playing a traditional stringed instrument.

The Internet Party of Ukraine has been around since 2010 and, on the evidence of this video, clearly understands the principal of creating a viral ad.

The bizarre party political broadcast features Darth Vader strumming a bucolic version of the 'Imperial March' from The Empire Strikes Back on the bandura, a traditional Ukrainian instrument.

Watch: Star Wars without the music is bizarre

The Internet Party is actually fielding Darth Vader, or at least someone in costume, as the official candidate of the party in presidential elections. In other broadcasts he is seen on Kiev's Independence Square surrounded by stormtroopers during the protests which took place there earlier this year.

An attempt last March to field the Sith lord as a presidential candidate proved unsuccessful when he was rejected by the election commission - a plot, some might unkindly suggest, worthy of the Star Wars prequels.