Why are orchestras arranged the way they are? 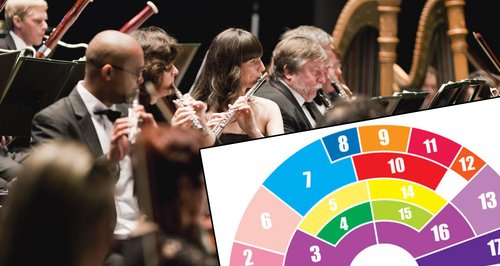 How come the flutes are always hidden behind the violins? And why can’t the tubas sit right next to the conductor and soak up a bit of the orchestral limelight which is totally snapped up by the strings anyway?

Well, until around 100 years ago, this format didn’t exist. In fact, the second violins used to be seated opposite the first violins, where the cellos normally are.

This seating plan helped support the ‘antiphonal’ – or conversational – effect in the strings, which 18th and 19th-century composers like Mozart, Elgar and Mahler often wrote into their music. Listen out for it in the finale to Mozart’s Symphony No. 41 ‘Jupiter’:

But then in the early-mid 20th century, Leopold Stokowski came along and changed the game. Best known for conducting the Philadelphia Orchestra, Stokowski thought the previous layout didn’t provide the best sound projection, so he radically experimented with different seating plans.

“On one occasion, he horrified Philadelphians by placing the winds and brass in front of the strings,” says Courtney Lewis, music director of the Jacksonville Symphony Orchestra. “The board was outraged, arguing that the winds ‘weren’t busy enough to put on a good show.’

“But in the 1920s he made one change that stuck: he arranged the strings from high to low, left to right, arguing that placing all the violins together helped the musicians to hear one another better. The ‘Stokowski Shift’, as it became known, was adopted by orchestras all over America.”

With regard to volume, it makes sense to put all the violins together at the front. An orchestra has 20 violins and two tubas because tubas are a lot louder than violins – so with the same logic, violins should also be put at the front so they can be heard.

There’s also something to be said for the visual beauty of putting violins at the front. The sweeping motion of twenty violin bows moving together in unison is rather pretty – and you could argue it would be a shame to change that.

But after years of watching pretty unified violins, is it time conductors channelled their inner Stokowski, and changed up the seating plan again? Then, perhaps, the tubas could finally enjoy some time in the spotlight.