Carols from Queen's: Choir of The Queen's College Oxford 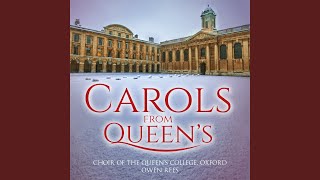 In the Bleak Midwinter

On this suitably festive album, one of the world's most renowned choirs presents popular favourites that have deep associations for their institution.

Several of the composers and arrangers of the carols featured here were connected with The Queen's College. The Boar's Head Carol is the work most strongly associated with the heritage of the College, originating in the 14th century at Queen's. It has been sung every year since at the Christmas time Boar's Head Feast in the College Hall.

Kenneth Leighton, composer of Lully, lulla, thou little tiny child and Herbert Howells (A spotless Rose), both studied at The Queen's College. Harold Darke (In the bleak midwinter) and Ivor Atkins (The Three Kings) were both members of Queen's.

The Choir is on tremendous form here, ably directed by Owen Rees. This is a beautifully performed Christmas album which captures the spirit of the season, and the sense of history that imbues all of the choices.