Are Led Zeppelin guilty of plagiarism? A music theory analysis 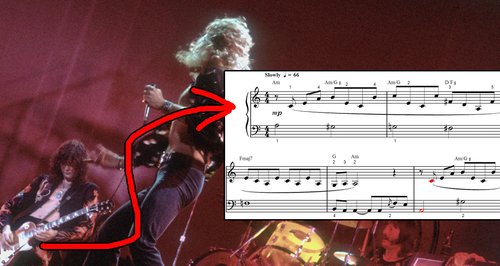 We’ve taken the two excerpts apart to see if it’s likely that Led Zeppelin really did nab that iconic motif from their former touring buddies Spirit.

This week, Jimmy Page and Robert Plant from Led Zeppelin will appear in court to defend their song ‘Stairway To Heaven’ which allegedly steals musical material from the song ‘Taurus’ by Spirit. Rock beef! Let’s take a look at both sides, shall we?

Here’s Spirit’s original, and then the mighty Zep in their pompous prime:

Focus on those introductory figures. Both are in A minor, both have bass lines that descend chromatically four times, both would be played at the same fret on the guitar, and they share an approximate tempo. You can see a handy little musical representation of that in this piano transcription. Is that enough for a writing credit to change or money to exchange hands?

Regardless of whether it is enough evidence, according to LA district judge Gary Klausener the dispute actually extends to the ‘concept and feel’ of the entire works. But on hearing those extracts, it seems like we’re basically talking about 10 seconds of musical material. If it is enough for legal action to be carried out, then we hate to be the ones to break this to pretty much all composers ever: there might be a few more cases to settle.

Chromatically descending bass lines over a gradually evolving chord pattern, you say? Get Chopin on the phone, he’s owed millions!

And Purcell will be livid!

OK, so we’ve made a slightly facetious point. But the whole idea of music ownership is so nebulous, so hard to wrangle into a legal framework whereby people can be said to have ‘invented’ certain sequences of pre-existing notes and chords, that a case like Led Zeppelin and Spirit becomes almost impossible to unpick.

True, Led Zeppelin did tour with Spirit in the ‘60s and would likely have heard ‘Taurus’ a number of times prior to writing their own A minor/descending chromatic bass/acoustic guitar/mid-tempo masterpiece. It seems plausible that some form of conscious or unconscious absorption took place. Is that any different from Ed Sheeran nabbing the chords from Marvin Gaye’s ‘Let’s Get It On’? Does it matter that you can literally sing the tune of the Marvin song over the top of the Ed song? Does it matter that that particular chord progression can be found in dozens of million-selling records?

The problem here goes beyond how similar the Zeppelin and Spirit songs are. It goes beyond music theory, it goes beyond ownership, it goes beyond owed royalties and songwriting credits. No legal action will occur between the Marvin Gaye estate and Ed Sheeran, because it’s generally accepted that those chords are public property. Is Led Zeppelin's greatest sin, if indeed it is one, merely soaking up the essence of an obscure song rather than one that featured a more recognisable musical language?