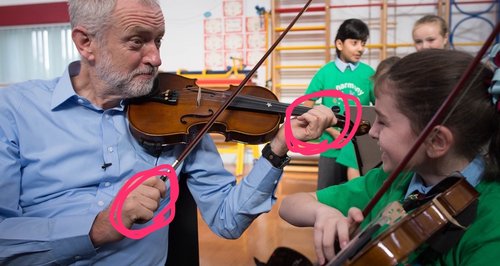 The recently re-elected Labour leader took time out from his party conference to visit Faith Primary School in Liverpool, where he was invited to join a youth orchestra for practice.

Corbyn given a lesson in harmony and maths by Jessica, 10. Told "play that four times". He plays it five. pic.twitter.com/LmYyUwXh8W

We thought it would be apposite to provide some observations on Corbyn’s violin technique.

Bow hold
The most obvious problem here is the bow hold. We know this was an impromptu lesson, but come on. If Corbyn was planning to join The Pogues, we could understand - but clearly we’re aiming for a classic bow hold here, and frankly he’s holding it like a wooden spoon over a pan of soup. NO, JEREMY. 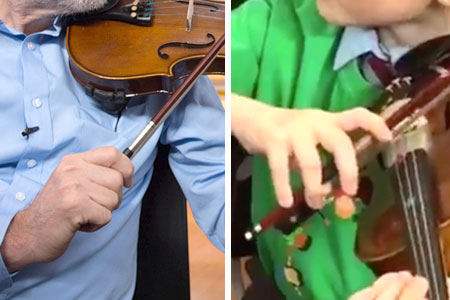 Left hand
Another basic error, unfortunately. Although a flopped left hand is acceptable, even favoured in the fiddle tradition, the traditional school of tuition calls for a strong, supple and upright left hand that holds the violin neck nimbly. Corbyn’s opted for an awkward, pancake-flat position that will do him no favours if he intends to reach further up the neck and will nix any chances of decent vibrato.

Posture
Unless you’re Glenn Gould or the rest of your technique is flawless, your back shouldn’t touch the chair. Call us regimental, but this is very much ‘lesson no. 1’ stuff.

Thank you very much Jess from @liverpoolphil who taught me how to play the violin this morning. Great project to visit during #Lab16 pic.twitter.com/Zh4hmaetbz

Conclusion
These are generally forgivable sins for a first lesson, but ideally they should’ve been ironed out straight away. If you want to make a direct comparison with David Cameron’s recent musical forays, it doesn’t seem like Corbyn has the same sense of musical ‘normalcy’ that the former Prime Minister has - but perhaps this marks Corbyn out as a rule-breaker, an innovator? Not for him the tried and tested methods: instead, even though it’s haphazard, worrying, maybe even unsophisticated, he’s striving for his own musical territory.

Game of Thrones soundtrack: everything to know about composer Ramin Djawadi’s fantasy score

‘Nothing in music is ever new’ says Olivia Rodrigo. And all these classical composers would agree.