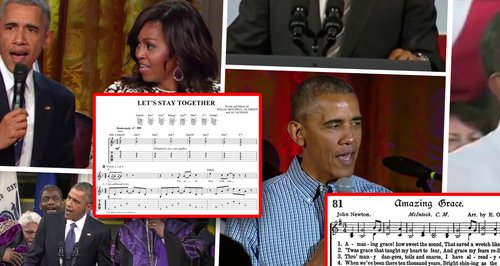 Over the years, the 44th President of the United States has been prone to bouts of singing - but just how good are Barack Obama’s pipes? We’ve analysed the evidence.

This is perhaps the first time the world realised that Barack Obama might just have a singing voice in there somewhere. This speech, back in 2012, was attended by The Reverend Al Green, soul legend and owner of one of the most iconic voices in history.

So the former-POTUS decided this would be the time to pay small tribute to a legend, by singing the opening line of ‘Let’s Stay Together’. Obama shows total ease with a high tenor line, sensitive and very much in tune. Even more impressive, he’s actually singing in the exactly correct key of the original recording, suggesting there might be something resembling perfect pitch (or at least great intuition) in Obama's musical arsenal.

Listen to both and compare:

After a promising Al Green impersonation, however, comes this slightly duff rendition of Happy Birthday. Not that Happy Birthday is often a barometer of great singing, but still. This impromptu performance suffers from Obama starting so high that when he reaches the climax he has to duck out and let the crowd take over. Nice sentiment, flawed execution.

Wow, Obama really loves singing Happy Birthday. This time, it’s for his daughter, Malia, and unfortunately the song still proves a bit of a stumbling block. He finally manages to slide up that huge octave leap at the end, but it’s a bit hairy.

At this White House tribute to the great Ray Charles, the former President takes the stage to kick off a Gospel singalong with a simple call and response refrain. His ‘Hey’ and his ‘Ho’ are perhaps missing the gusto of previous performances, but they’re smack in the comfort zone of his tenor range and, therefore, perfectly adequate to get the party started:

Perhaps his most poignant performance, this rendition of ‘Amazing Grace’ came at a difficult and emotional time for the USA and for Obama himself - the memorial service of Clementa Pinckney, one of the victims of the 2015 Charleston shootings.

Undaunted but clearly emotional, Obama opens the song up to huge cheers. But notice how he tweaks the major third in the opening phrase to give it that gospel swagger - this is the technique of someone who clearly knows how to manipulate music for specific effect. And though the song is a mite too low for him at the beginning, he improvises grace notes on words like ‘once’ and ‘was’ to take the melody up to his most comfortable register.

Technically it’s far from perfect, but the intensity and confidence of the performance are absolutely bang-on.