A music theory analysis of the new Taylor Swift single 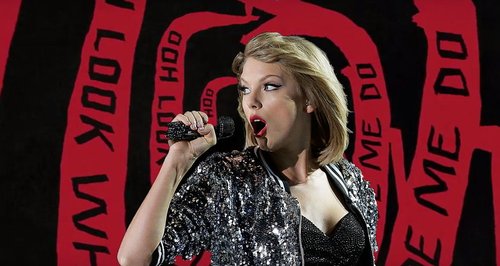 What musical tricks has Taylor Swift deployed for her comeback? It’s time to get technical…

After the pure pop of her last album, Taylor Swift is keen to make an impact - and not just with her playground-insult lyrics. Let’s cast aside the absolute cavalcade of shade-throwing in her words and focus on the musical techniques Swift is using here to get her point across. Please enjoy ‘Look What You Made Me Do’:

Before a single word is sung, there’s a brilliantly creaky Bernard Herrmann-esque string refrain, adorned with delicate pizzicato. It’s the kind of atmosphere building you’d get at the beginning of a creepy kids film, maybe a hint of Danny Elfman, in equal parts nostalgic and genuinely menacing, and possibly aligned with Swift recasting herself as… gasp… a villain?

But because we’re in the business of popular song, you really have to move on quickly once you’ve established your tone. So we’re ushered into the new Taylor Swift aural aesthetic, which seems to be intense, intricate minimalism. Drum machines programmed with the bare minimum of fuss, a four-note melody and a throbbing, glissando bass drop are all we get until the bridge, which is even simpler - a two-note vocal melody, octave-spaced and alternating between the first and fifth degrees of the scale. This is all calculated, measured and meticulously performed: no slides into the blue notes, not a hint of showboating. Behind, a piano begins to gently thunder. It is, for a few moments, magnificent.

And then… chorus. Well, what you WISH was a chorus.

Now, don’t get us wrong. It’s important to try things out, to experiment. But to deprive the listener of the gratification that a melodic monster chorus would surely provide is cruel. What should (logically) be an absolute banger is rendered cold by a chorus that sticks to nothing more than those drum machines and a spoken refrain.

There’s an argument for either side here. On the one hand, Swift could be deliberately withholding that chorus we know she can deliver because that is what ‘old’ Taylor Swift would’ve done. On the other hand, it might be that she thought this was a good enough pay-off.

And that’s before you consider the context here. We agreed not to look at the lyrics too closely, but the opening not-tricky-to-decipher barbs directed at Kanye West become altogether more interesting when you think about Swift’s instrumentation. Would it be overthinking it to suggest that, after Kanye’s 808s & Heartbreak album, to use drum machines in this sparse a fashion on a major pop song is a bit dicey? Whether or not Taylor Swift is leading us up the garden path with all this extra baggage and side-eye, the musical result is confusing. Interesting, but confusing.

The second verse and bridge are still more satisfying, delightfully augmented since their first iteration, which makes the second hollow chorus all the more frustrating (and those lyrics really don't scan correctly). Swift could’ve gone full Bond-song here, eked every ounce of devilish romance from that string arrangement, but she didn’t. It’s either impressive restraint or just a bad decision.

As the song concludes, the frustration is complete - the final chorus hints at the splendour that could’ve been, providing a skeletal version of all that potential bombast but refusing to deliver it fully. So is Taylor Swift now a musical prankster, a compositionally capricious innovator with an ear for the absurd? We’ll have to sample the rest of the new album when it arrives in November…