Is it OK to use your mobile phone during a concert? 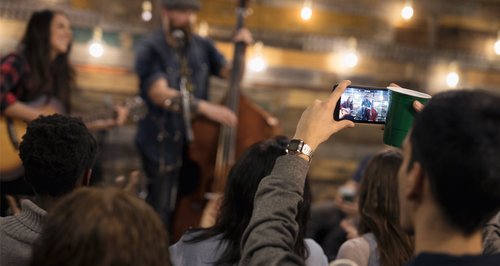 Is it OK to take a photo? Should you be allowed to reply to a text, or do you wait until after the concert? And what happens if your phone rings during a particularly moving Adagio?

Obviously, we struggle to live without our phones at any time, even when Elgar is trying to distract us with his lovely Cello Concerto.

That said, there are still a few unsaid ground rules of what to do with our precious devices during a concert.

Put it on silent.

A few years ago, pianist Christian Zacharias was giving a concert, when someone’s mobile phone started going off in the audience. So, he stopped the whole performance and it all got incredibly tense and awkward…

“People should realise that music lives in something completely different,” said Christian and his wife. “This is the rare moment when our minds can focus on one thing, and the least you can do is honour it by listening, and being there in silence.”

So, if you don’t want the soloist to stop the whole concert to remind you how embarrassed you should be by your own forgetfulness, be sure to flick that silent button on.

Save the pics until the curtain call.

Most concert halls are pretty strict on this one – so unless you want to attract the attention of an over-zealous usher, it’s probably best to save those snaps for the applause.

After all, it’s great to have a visual reminder of the beautiful music you experienced, but you also don’t want to be that person who’s so glued to their phone they end up watching the whole concert through their phone screen.

We’re a big fan of a gram, as you can see from our diverse selection of photos of cats sitting on pianos. But instead of creating your Instagram post or story during the concert, why not take a couple of photos during the curtain call, then gram later? A #latergram, if you will.

Gershwin in a London pub, thanks to Classical Pop-Ups (follow @saliwyn for more)

Absolutely no iPads or selfie sticks.

On reflection, this should have been the first point. There’s getting a pocket-sized mobile out for a photo, and then there’s bringing out an iPad or expanding your selfie stick from your rucksack. For fear of incurring the wrath of the entire row of people behind you, it’s definitely safer to stick to the phone.

Violinist Nicola Benedetti has been critical of venues who allow audience members to use their phones. Here’s what she told Classic FM:

“I don’t think people should have their phones out and be able to eat and drink at concerts,” Nicola says. “I think there’s something extremely intense about the music, and as a musician I want people to feel as much as possible from the performance.

“And in order for them to feel as much as possible, they need to be as engaged as possible.”

So instead of attempting to film Tchaikovsky’s entire violin concerto on your phone, why not take a quick photo at the start, then let yourself get completely swept up in the music?

After all, it’s not a feeling you want to miss…