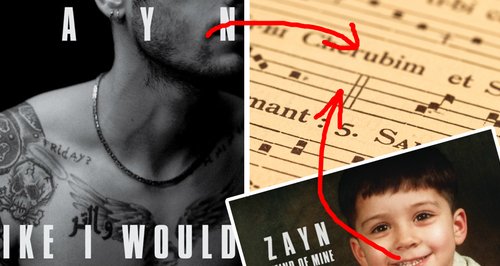 Zayn Malik has unleashed a new single, and before it’s even a few hours old, we’ve put together a detailed music geek's analysis.

BOSH. Unlike ‘Pillowtalk’, there’s no deliciously moody intro here, and we’re straight in to ‘Like I Would’ like Rossini into a game terrine. Zayn’s there, so’s a very thumb-y bassline and some fairly standard platitudes: basically, it’s standard scene-setting. Our scene: Zayn’s lighting up, he’s feeling a bit woe-is-me, he might be on the phone, but essentially he’s a frowny emoji rather than the cry-laughing one. Not the most adventurous of starts.

But then, something quite magical happens. Proving to us that he is in fact a human being, a tiny, almost-imperceptible vocal wobble occurs when Zayn sings ‘cold-hearted’. It’s only a tiny crack, a seemingly unconscious little blip, but it’s also a gorgeous little detail in a fairly unremarkable beginning. Isn’t it refreshing that he’s willing to actively include fragility and frailty as a performance trait? He’s not just an emoji! He’s a human man!

Time for this gif again:

By this point, hearts well and truly aflutter, we’re now totally on board the Zayn Train (TM) once again. It’s a good thing too, because that train is about to depart the station allegro con ruddy brio. A rather tasty choral arrangement is a positively radiant chime, arriving in the ballsy key of B flat minor, where the song now finds itself snugly nestling. There’s something almost faux-religious about the hum of it, not quite gospel… maybe like The Kings Singers after an intense R. Kelly vigil.

All of which means that we are now very much in chorus land. And what comes with a chorus? Falsetto! Zayn is call-and-response-ing with himself in different vocal registers! Immediately it’s a mite formulaic, sticking rigidly to those black-key pentatonic scales, and nowhere near as brave and exposed as the textures on ‘Pillowtalk’. But still - crucially - it’s catchy enough to make you tolerate a second round, and simple enough that you can elaborate on it with harmonies a second time round to stop it from getting boring. Neat.

The penultimate chorus is subdued and washed out to build tension, but listen to that synth choir in the background: gorgeous, Whitacre-y suspensions, manipulations and then, finally, a rush towards a final, full-blooded chorus iteration.

If we had to make one complaint, it’d be that Zayn’s actual singing voice doesn’t have much to do here, besides shows us the melody and do, y’know, ‘emotions’. Frankly, it’s not the most timbrally and tonally versatile of instruments, but he makes do with what he’s got.

Sensibly, he and his writers (whoever they are - deets unavailable, thanks Wikipedia) have kept to the strong middle of his register rather than pushing him anywhere else without the comfort of falsetto. There’s a hint of ad libbing in that final chorus and slightly before it, but it’s not quite the improvisational motherlode we’d like to hear. He’s holding back, is what we’re saying. Have confidence, Zayn. We know you can go full Prince.