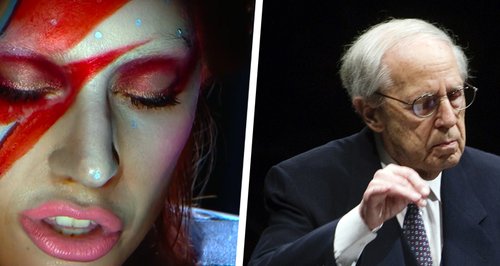 There was a huge tribute to David Bowie in last night’s Grammy Awards ceremony. But by their own standards, the Grammys should’ve paid tribute to Pierre Boulez too.

In his lifetime, David Bowie changed fashion, art, music and, y’know, everything. He also won a single Grammy Award for the video for one of his lesser singles, ‘Jazzin’ For Blue Jean’, and the Grammy for lifetime achievement in 2006. A worthy winner, everyone will agree.

So when Lady Gaga got on stage last night to do a whistle-stop tour of Bowie’s back-catalogue (and boy did she cram in the stops - each song got about 30 seconds  of airtime), fans, viewers and media alike were all obviously delighted. And she managed to do it while dressed as Elvis Presley with Chesney from Corrie’s hair. Isn’t entertainment brilliant!

Earlier in 2016, the classical music world lost perhaps its most influential and noted living composer, Pierre Boulez. Boulez, a firebrand and relentless stirrer in his circles, has 26 Grammy Awards to his name. 26. And one of them is a lifetime achievement award too, awarded at last year’s ceremony.

It’s a trite comparison, but please indulge us for a moment. Bowie has two Grammys and changed popular culture forever. Boulez has 26 Grammys and, in his own, less mainstream way, changed contemporary classical music forever. Wouldn’t it have been equally apposite to honour Boulez with more than just a nod in the roll call of artists sadly lost in the year? Wouldn’t it have been in the spirit of discovery and diversity to honour someone who is, on paper at least, a Grammys legend?

Artists With The Most #GRAMMYs:

A Pierre Boulez tribute would have been cool too, but it's not like the Grammys care about classical music that much. #Grammys

Classical music has always had a hard time at the Grammys. Not for lack of awards, though, just for lack of visibility. Classical awards are very much seen as the equivalent of the ‘technicals’ at the Oscars - no headlines will be grabbed by Joyce DiDonato and Antonio Pappano’s album of duets, or Andris Nelsons’ righteous Shostakovich 10. Perhaps classical music’s Grammy zenith came in 2014 when Metallica were joined by Lang Lang for a performance of the metal legends’ hit ’One’, but the classical element was very much tacked-on, basically some widdly keyboard stuff before Hetfield & Co. indulged in the ultimate bro-down.

But a performance, even a brief one, of a Boulez work would’ve been not only a left-field idea, but a thrilling gamble, every bit as provocative as Tay-Tay not-so-subtly calling out Kanye for hoovering up the success of others. As it happened, the In Memoriam section did honour Boulez briefly (though, annoyingly, a glitch in the Grammys’ own YouTube video renders it invisible):

And, if it’s not too fanciful, wouldn’t Lady Gaga have been the perfect person to perform it? We know she’s got the pipes for it, but it seems the Grammys weren’t brave enough to honour one of their most successful and garlanded artists.