The 7 most insane pieces of classical music ever written

This is classical music at its most crazy. Includes helicopters, a piece which is due to end in the year 2640 and a duet with the apocalypse

The Russian composer/pianist's incomplete last work was penned to be performed in the mountains. It was meant to contain hundreds of performers, including elements for light, smell and touch. It was to last a week and be followed by the end of the world. Here's the completed version by Alexander Nemtin (sans Armageddon).

It's an Ionic work from the last century, for a quartet of string players and four helicopters. It's both stand-alone piece as well as a scene from the composer's epic operatic masterwork Mittwoch aus Licht. This epic musical cacophony was first performed (and even recorded) in 1995, to the delight of chamber music and aviation anoraks alike.

From Beethoven to Messiaen, birdsong has long been an inspiration to composers, but a guy called Jim Fassett must have decided to take it a step futher. In the 1950s he composed a symphony made entirely of recordings of birdsong. Close your eyes and try not to think of Hitchcock.

John Cage: As SLow aS Possible

Organ²/ASLSP (As SLow aS Possible) consists of single notes or chords, which change very, very occasionally. The performance started in 2001, and it's continuing until the year 2640. In 2013 crowds flocked to St Burchardi church in Halberstadt, Germany to hear one of the notes change in performance. (and we thought Karajan's tempos were on the slow side)

Here's a symphonic poem for 100 metronomes. In 1962, Ligeti thought it would be a great idea to compose a work for ten performers, each responsible for 10 metronomes. It was all part of his rather brief flirtation with the Fluxus (or flow) movement in music and has the (rather lovely) title of Poème symphonique.

Four and a half hours long, and for one pianist, British Parsi composer Sorabji is to be held responsible for this crushingly difficult contrapuntal piece. We hope the score helps shed some light... 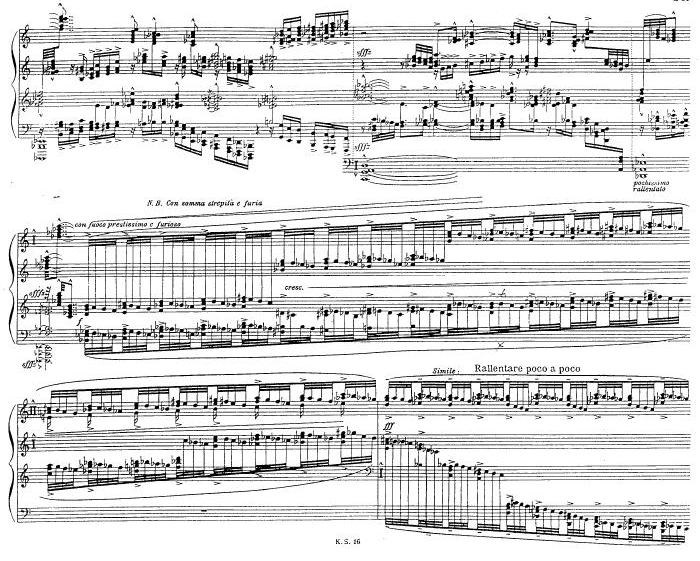 The composer says "The closing 4 pages are so cataclysmic and catastrophic as anything I've ever done—the harmony bites like nitric acid - the counterpoint grinds like the mills of God..."

Of course crazy, high-concept pieces of music have been around for as long as music itself. Let's take this late Bach masterpiece – a baker's dozen of contrapuntal pieces with a single subject woven throughout. It's an unstructured, unorchestrated collection of manuscripts with enough puzzles and enigmas to make Elgar proud. Contains this perpetually ascending canon – just take a listen...