The most unfair and merciless hecklings in classical concerts 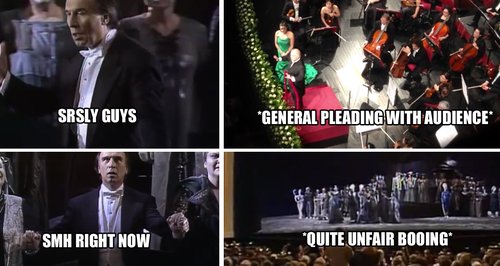 We've found some of the most outrageous boos, catcalls and heckles from the classical music world. Divas and divos, you have our sympathy.

1. Even Abbado gets booed

Richard Strauss's 'Electra' is not something to view close to bedtime, and this 1989 Vienna State Opera production really was the stuff of nightmares. It was too much for the audience and the great Claudio Abbado was greeted on stage by a chorus of disapproval. He doesn't look happy...

The Little Mermaid, the call girl? Yeah, unsurprisingly this 2012 Royal Opera House production of Dvorak's 'Rusalka' did not go down too well. The fairytale setting was described as 'vulgar' and as you can hear, the audience in the regal surroundings of Covent Garden were distinctly not amused.

We're back at La Scala, where the patrons have high standards and are not afraid to voice their views. It was some bizarre Verdi staging which set this crowd off in the curtain calls for Macbeth, and poor Valery Gergiev gets a reception akin to a defender who just fouled Rooney at Old Trafford.

On this amazing night the legendary tenor got so fed up with a chorus of boos in his Aida, his ego had to seek sanctuary prematurely in the dressing room. Storming off stage in his ridiculous, frumpy golden costume, it was an ultimate diva moment, and YouTube gold.

Now this is how you deal with a heckle. Soprano Cecilia Bartoli was getting some very vocal grief from one of the boxes at La Scala, so she turns to the orchestra and nails the opening to this La Cenerentola aria, before turning to her accusers in the box upstairs for the most passive aggressive melisma you've ever heard.