Is this the most bizarre and technically difficult piece of vocal music ever written? 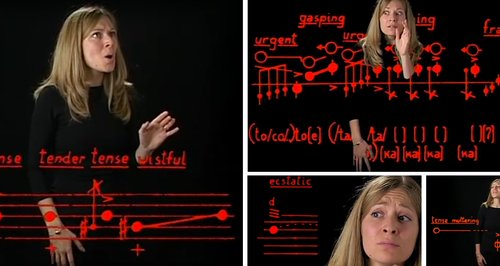 Sopranos: are you looking for a challenging new work that will simultaneously send you insane? It’s time to analyse a classic 1965 work from Luciano Berio.

You’re a hard-working, adventurous soprano who wants to stretch themselves. You’re tired of the novelty of singing things are either excessively high or excessively long, or a combination.

There’s only one thing for you to do: get experimental.

Let’s hear it for Berio’s Sequenza III, scourge of sopranos across the world:

We’re imagining that the thought of performing this legendary piece has encouraged this reaction from you right now:

Want some interesting facts about this piece? Let’s go. First of all, Italian composer Berio wrote an accompanying note for the piece, which ends like this:

“In Sequenza III the emphasis is given to the sound symbolism of vocal and sometimes visual gestures, with their accompanying “shadows of meaning”, and the associations and conflicts suggested by them. For this reason Sequenza III can also be considered as a dramatic essay whose story, so to speak, is the relationship between the soloist and her own voice.”

Sequenza III was originally written for Cathy Berberian, also Berio’s wife up until 1964 - one year before the piece was written. Co-incidence? Here she is absolutely smashing the piece to bits:

Throughout all the bizarre ululations and strange performance directions, it’s possible to hear snippets of more conventional singing techniques. Look out for the ‘A few words’ and the ’To build a house, to sing’ sections to see how Berio incorporates something recognisable into what is basically an insane jumble.

Here’s the whole piece, with score, so you can follow along: