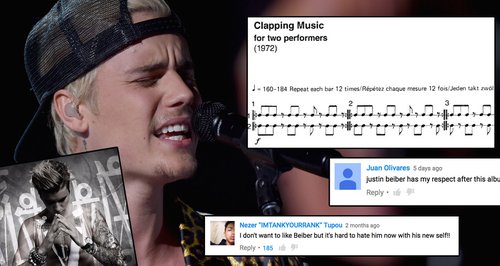 The latest single from Bieber's monster-selling 'mature' album 'Purpose' is here: and we're turning a critical eye on 'Company'.

Right, so there are a couple of options for ingesting Justin Bieber’s new single, ‘Company’ - there’s the audio alone, and there’s also this extended video. We recommend the video version because, as you’ll see, it prefigures some noteworthy musical content just in the drama of the video alone.

Unfortunately if you’re reading this at work, it means you have to suffer through some stylised… err… fruitiness towards the end, but you know how it is. Open up a new tab and power through if necessary.

The first thing we’re shown, musically speaking, is some Steve Reich-esque handclaps. Do we take from this that Bieber is actually a huge fan of progressive minimalism? Does he secretly harbour a desire to do a complete performance of Clapping Music with Big Sean at Wigmore Hall? It grows into finger clicks and beatboxing before stopping altogether and yielding to some dark synth chords. This is where the tricks begin to show themselves.

Substantial jam work has clearly gone into the verse bassline which murmurs and skips around, totally distracting from what is essentially quite a simple progression. It’s neatly done, and hinges on a constant return to a G major chord, where the song feels at its most resolute. It’s designed to keep you unsettled, and it works.

Bieber’s singing voice is neither the most distinctive or the most dextrous of instruments, but he (or whoever makes these decisions) has been wise enough to make that a virtue. Ornamentation is minimal, the melody is slap-bang in the middle of his range and he’s actually singing pretty quietly. The melody itself during the verse hugs little three-note motifs - whether it’s a D-E-B or a G-A-B, they’re simple shapes that fall nicely for the voice and allow Bieber to sound like he’s doing more work than he really is.

Then we move into the wordless chorus, where one of the older tricks in the book is deployed: repeat the same melody with an octave-spaced doubling part so that it gives the impression you’re hearing something different. It fills up more time and crucially embeds the melody even more insidiously into your brain. Songwriters have been doing it for decades.

It’s a louche performance from Bieber and, if anything, one that could’ve done with a little more storytelling. Not like Schubert lieder storytelling, necessarily, but y’know, just a bit more expression and colour, a trifle more telegraphing the feels. But when you’re 21 and spending most of your time trying to secure a new pet monkey, maybe you’re not too concerned with rubato phrasing.

One more thing you get with the extended version of the video is this fantastic little breakdown section that presents all the themes we’ve been exposed to so far, but without any instrumental backing. Again, it’s a trick to elongate the song’s musical life, but in essence it’s just repeating the same stuff over and over.

When you look at the credits for ‘Company’, you’ll be shocked to know that there are seven individual songwriters credited. SEVEN. It’s a successful song, sure, but one that completely relies on existing tricks to navigate you through it - can this REALLY have required seven people to execute? Yeah, yeah, it’s naive to question modern songwriting-by-committee when everyone’s at it, but come on. Seven people. SEVEN!

Still, those gripes aside, we’re on board with this. It fits nicely with Bieber’s ‘mature’ (i.e. ‘not calling Anne Frank a Belieber’) phase, and there are enough compositional tricks to make the minutes pass without offence. It’d be nice to hear Bieber take a chance on his own voice, though: it’s all very well employing a battalion of songwriters to add the bells and whistles, but there’s another, more obvious instrument that he needs to tend to first of all.