Why do orchestras tune to an ‘A’? 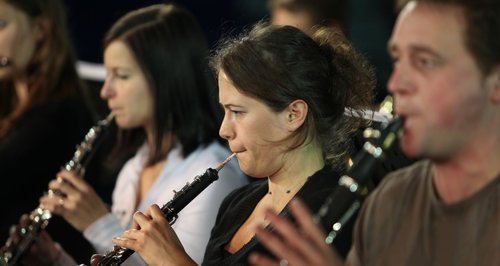 At an orchestral concert, you’ll hear an A from the oboe before you hear anything else because it’s the note that the rest of the musicians tune to. But where did this tradition come from and why is it still around?

Why do orchestras tune to an ‘A’?

Conveniently, every string instrument has an A string. So it makes sense for string orchestras to tune to the open A string of the first violinist. And as other families of instruments have joined the orchestra over the years, they followed suit.

Even if an orchestra tunes to the ‘A’ of a keyboard instrument, the oboe (or first violin) will still pick up the note and play it for the rest of the orchestra, to make sure everyone can hear it.

Contrastingly, most band instruments are pitched in B flat – so if you’ve ever played in a concert band, you will have noticed that you always tune to a B flat rather than an ‘A’.

When did orchestras start tuning to the oboe?

Listen to the sound of these lovely oboes:

Despite their distinctive sound, the oboe hasn’t always been in the orchestral spotlight.

When the first orchestras emerged in the late 17th century, they were mainly formed of string players. While the focus was on string instruments, oboists were sometimes used to strengthen the sound of the first and second violin section.

But then, composers started to realise that the oboe’s bright, singing tone could be put to better use. They began writing separate parts for the instrument, and even creating concertos for the instrument (for example, Albinoni’s Oboe Concerto in D minor).

So why do today’s orchestras tune to the oboe?

The penetrating sound of the oboe stands out from the orchestra, so it’s easy for all the musicians to hear.

Its pitch is also steadier than strings, so it’s a more reliable tuning source. This was especially true when all violin strings were made from gut (now they’re more often made from steel).

Longevity also has a lot to do with it: over time flutes, bassoons, French horns and clarinets drifted in and out of the orchestra; but oboes were nearly always written into orchestral scores. So they became the standard instrument for tuning.

Yamaha has another theory: “The only way of altering the pitch of an oboe is to adjust the breadth or length of the reeds; it is nearly impossible to make any sudden changes on the day of a performance. It is difficult to adjust the pitch of an oboe,” they argue. “Therefore the other instruments in a performance must be made to match, and that is why the oboe is the standard for tuning.”

Like any other instrument, oboes can be tuned sharp or flat. But most oboists use an electronic tuner to make sure their ‘A’ is on point.

In theory, the whole orchestra could use the electronic tuner to tune. It probably produces a more consistently accurate note than an oboe, as well.

But we think it would be a shame to lose this tradition. It’s surprisingly hard to imagine a concert without that reassuring initial sound of an oboe rising above the chitter-chatter, just as you’re settling into your seat and setting your phone to silent, before the full magnificent orchestra chimes in at pitch…