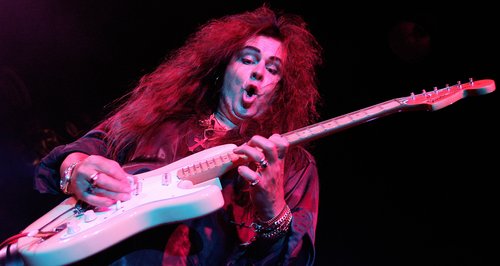 Marcin Jakubek's widdly version of Bach's dainty Badinerie is all shades of rocktageous. His YouTube channel has various similarly amazing covers too.

This one has done the rounds, but seriously - it's insane. Not only is the Four Seasons arrangement absolutely blinding, her sulky-faced playing is breathtaking. Even Eddie Van Halen is a fan, apparently.

Proving that thigh-high leather boots are the perfect sartorial choice for the concert stage, Swedish guitar maestro and unleasher of the fury Yngwie Malmsteen wails most righteously throughout his amazing Concerto for Symphony & Electric Guitar.

So it turns out Beethoven is the perfect match for the electric guitar. Here, a man who calls himself Dr Viossy (doctoral qualifications presumably exaggerated) shows us exactly how hard it is to play the Moonlight Sonata - just look at the relief on his face when it's over.

The stormy intro to the most famous piece of classical music ever is taken in to the realm of bedroom guitar showboating - and with over a million YouTube views it's clearly doing something right.

Deep Purple keyboard boffin John Lord composed this insane work of psychedelic blues abandon in 1969 and performed it at the Albert Hall in the same year to a crowd of terribly dressed teenagers. Frankly, though, it still sounds amazing - and the video is worth it to see conductor Malcolm Arnold trying not to bop around too much in the 'band' sections. Magic.

In one of the weirdest scenes in cinema history, Ralph Macchio from The Karate Kid plays one of Paganini's caprices on electric guitar as part of a hilarious 80s electric blues duel against guitar legend Steve Vai.

Incredibly, the result of said guitar duel will (we're not making this up) appease the Devil himself, who has taken control of the soul of one of the other characters, who is an accomplished blues harmonica player. Oh, and Steve Vai also did the handiwork for Ralph, meaning he's actually duelling against himself.

The film was a critical and commercial success, winning dozens of industry awards and securing its stars their place in the rich history of celluloid forever (lie).