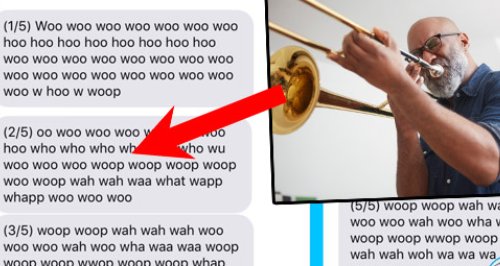 It’s 3.27pm on a weekday afternoon: what do you text your partner? Elaborate musings over your after-work grocery shop and that 10/10 pie you’re going to make? Probably, yes – but life is different when you’re a musician…

This trombonist thought it would be hilarious to use voice recognition to message his wife whilst playing the trombone. And *apparently*, it actually worked (according to the Internet, anyway).

Most of us have done the gag before, when you leave voice recognition on while doing the dishes, using your vacuum cleaner or having a coughing fit – and your phone freaks out on you, texting your mum seemingly drunken ramblings.

But what happens when you leave it on during practice time?

I accidentally texted my wife with voice recognition...while playing the trombone pic.twitter.com/tWCPSXbbrO

And here’s what happened when a dad texted his son with voice recognition, while playing the tuba...

My dad accidentally texted me with voice recognition...while playing the tuba

Now you’re in the mood for some technology-based hilarity, check out how Google hilariously interpreted these classical music-related searches...