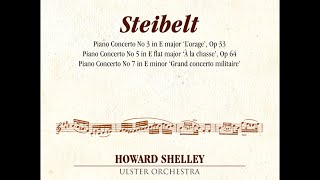 Daniel Steibelt, now almost completely forgotten, was best known in his day for daring to challenge Beethoven to a piano duel – and being humiliated.

DISCOVER: Introducing the man who challenged Beethoven to a musical duel - Daniel Steibelt >

Steibelt though was one of the most brilliant keyboardists of northern Europe for some 25 years. His own concertos were sensationally popular. But his longevity was not helped by his personality: contemporary reports say Steibelt was vain, arrogant and ostentatiously extravagant.

His most celebrated work – the Piano Concerto No 3 in E major, revived on this excellent recording by Howard Shelley and the Ulster Orchestra, was immensely popular because of its ‘storm’ finale.

Steibelt is no Beethoven or Mozart; he didn't have the ability to develop themes and stayed away from playing slow, sustained music. But, because he was a natural showman, the emphasis here is on dazzling fingerwork and glittering virtuosity.

Shelley brings Steibelt's music back to life with all the panache we have come to expect from the many other piano concertos he has recorded for Hyperion in their previous Romantic piano concerto series.