Album reviews and new releases: guitar master John Williams and a harpist at the movies 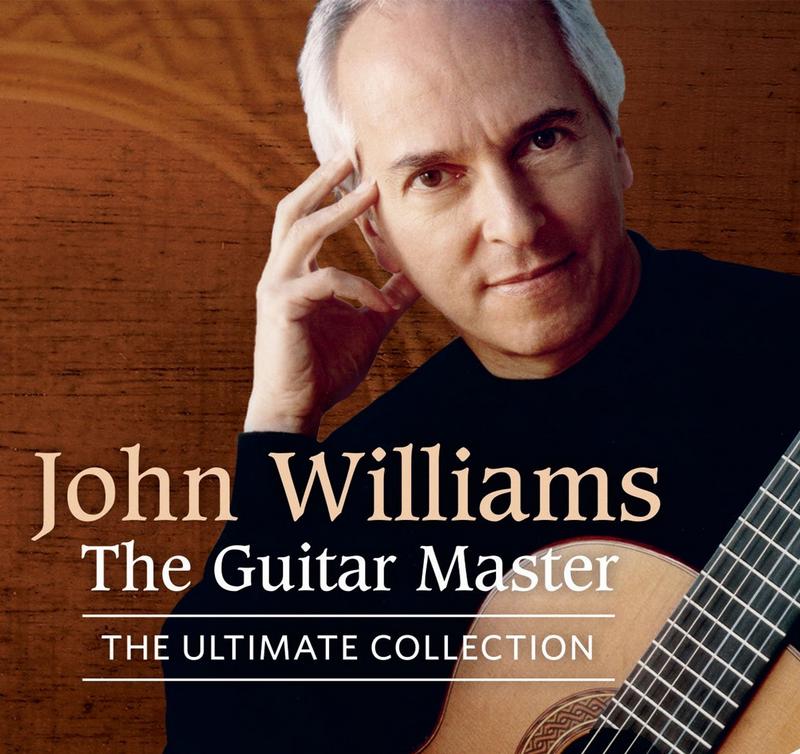 Celebrating John Williams's 75th birthday and the 50th anniversary of his signing to Sony, here's a special two-album collection of his most-popular pieces, including the instantly recognisable Cavatina, Gabriel’s Oboe and masterpieces by Satie, Bach and Handel.
He's been described as "perhaps the most technically accomplished guitarist the world has seen" and it's evident from his greatest performances that this has been a consistently brilliant career. 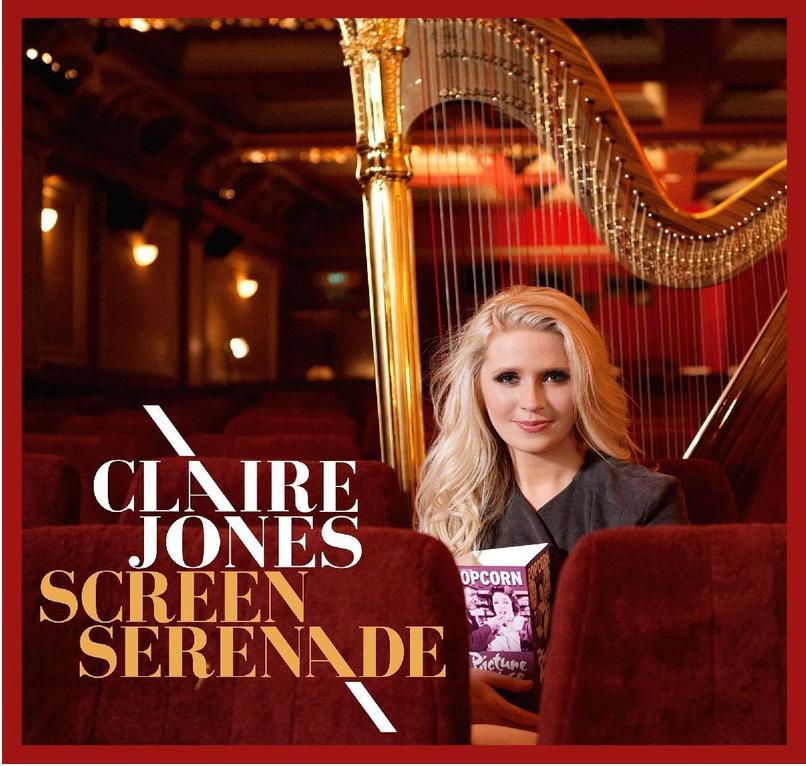 Claire Jones, the acclaimed Welsh harpist, returns with some of the biggest tunes from movies and television, all arranged for solo harp by her husband Chris Marshall. From commanding torrents of sound to the sublimely delicate, Claire gives us favourites including the 'Our Tune' Romeo and Juliet theme by Nino Rota, Ice Dance from Edward Scissorhands, and John Lunn’s instantly hummable music for Downtown Abbey. She says she's been in love with film music since she was a child and always wanted to create an album of her favourite movie themes. Her love of the genre shines through in the kind of album you can enjoy wherever you are listening. 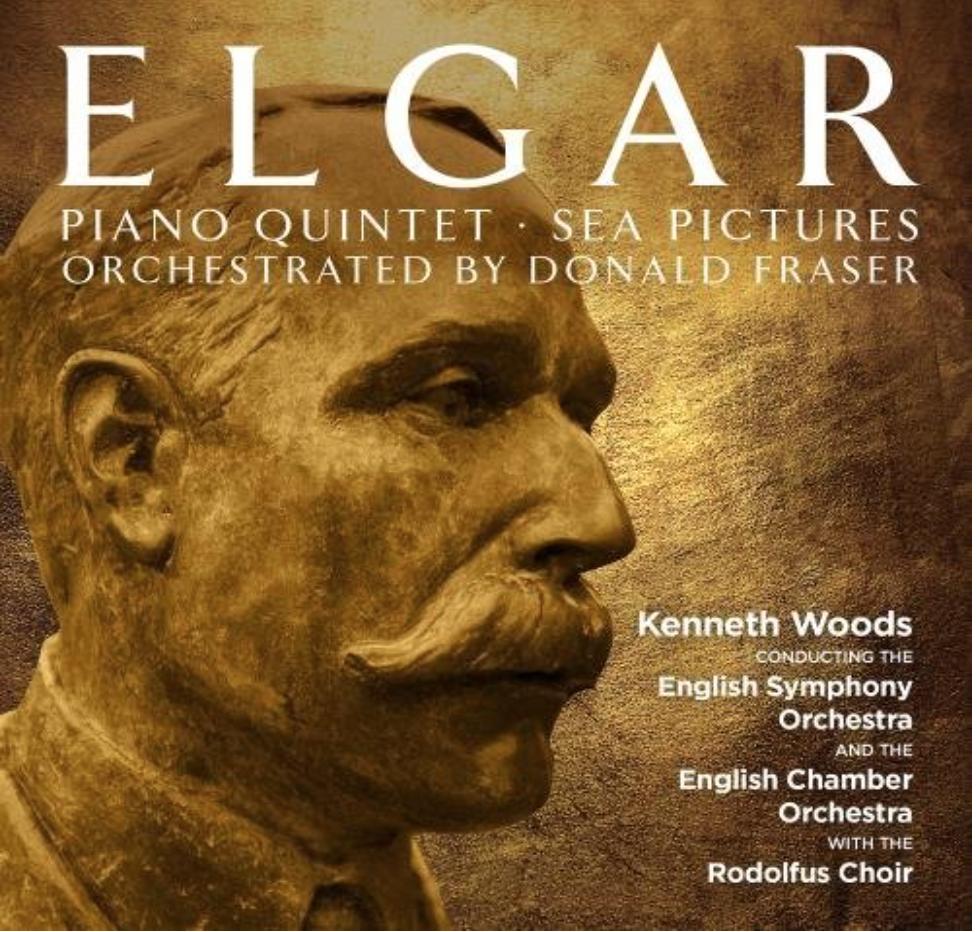 Elgar’s Piano Quintet, one of his finest chamber works, was first performed in 1919. Now, Donald Fraser has orchestrated it using the instrumentation of Elgar’s Symphony No.1 to create a work which could stand alongside any of the composer’s symphonies. Already getting for itself the title, Elgar’s ‘War Symphony" - based on an entry in Lady Elgar's diary - the work perfectly recreates Elgar's orchestral sound and gives us a completely new work. When it was performed in concert, one critic described it as a ‘triumph of transcription’. Also here is Fraser's choral arrangement of Elgar's Sea Pictures, a version which is sure to appeal to orchestras and choral societies worldwide. 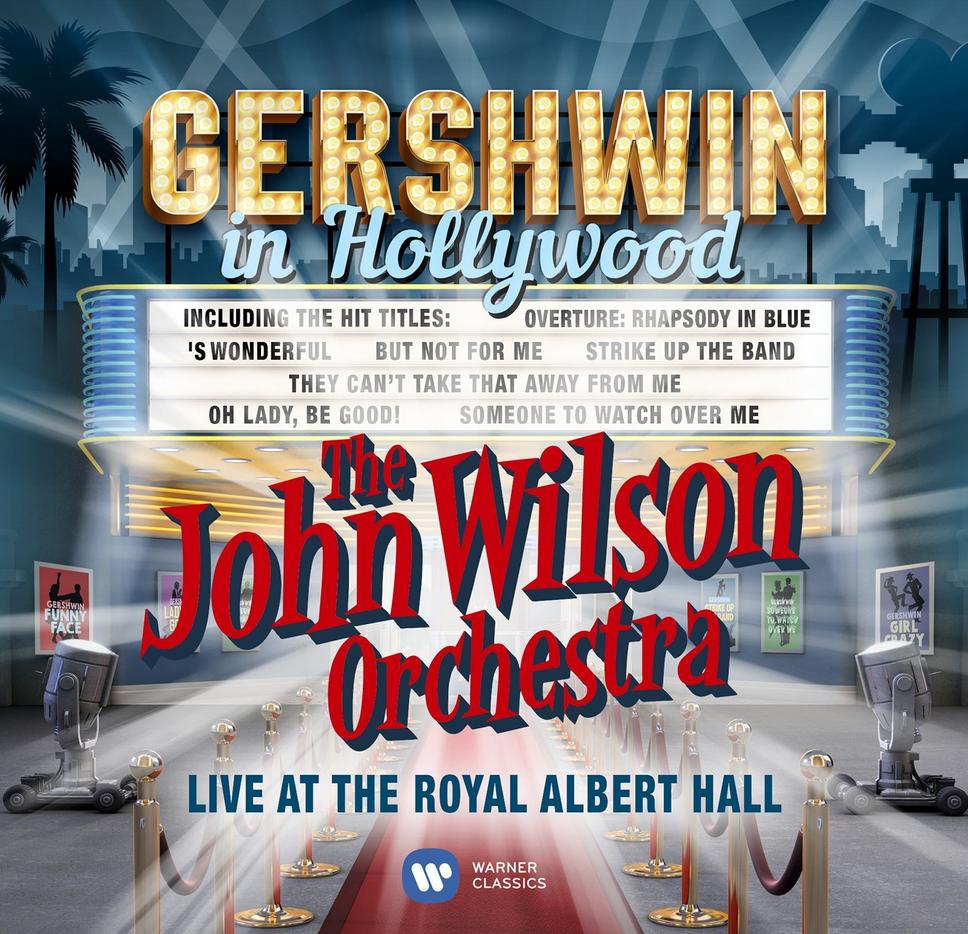 John Wilson’s live tribute to George Gershwin is an exhilarating album of movie music, featuring mainly posthumous versions of great songs, composed by Gershwin, with lyrics by his brother Ira. The Gershwins went to Hollywood in 1930, but their first film score, Delicious, bombed, and they quickly headed back to New York. They returned in 1936 to compose songs for the Ginger Rogers and Fred Astaire classic, Shall We Dance. This fared much better, with six outstanding songs, including masterpieces such as 'They can’t Take That Away From Me'. However, while working on their next Hollywood assignment, A Damsel in Distress, Gershwin was laid low by crippling headaches, which turned out to be a brain tumour, from which he died, still not yet 40. But Gershwin's songs continued to be used in movies as diverse as the sentimental biopic Rhapsody in Blue, from which also comes a marvellous 10-minute overture that kicks off the fun here, through to Star!, with a fine arrangement of 'Someone to Watch Over Me'. Wilson has painstakingly reconstructed the original arrangements of Gershwin songs from ten movies, including classics like An American in Paris.  It’s not just the remarkable pizazz of Wilson’s orchestra that makes its impact here, but also the obvious authenticity of these brilliantly played arrangements. Sometimes Wilson is let down by the singers he uses, who, unlike the orchestra, often don’t sound as good as the original vocalists. But this one, recorded in front of an excitable audience at the Royal Albert Hall last November, is different and better, with both vocalists, Louise Dearman and Matt Ford, sounding convincing most of the time. Of the 17 tracks here, 15 are songs, and I still think Wilson should revert to music that gives his orchestra the chance to shine on their own. But this is still a top class issue that will give great pleasure both to nostalgists, and to young people discovering the genius of the Gershwins for the first time. 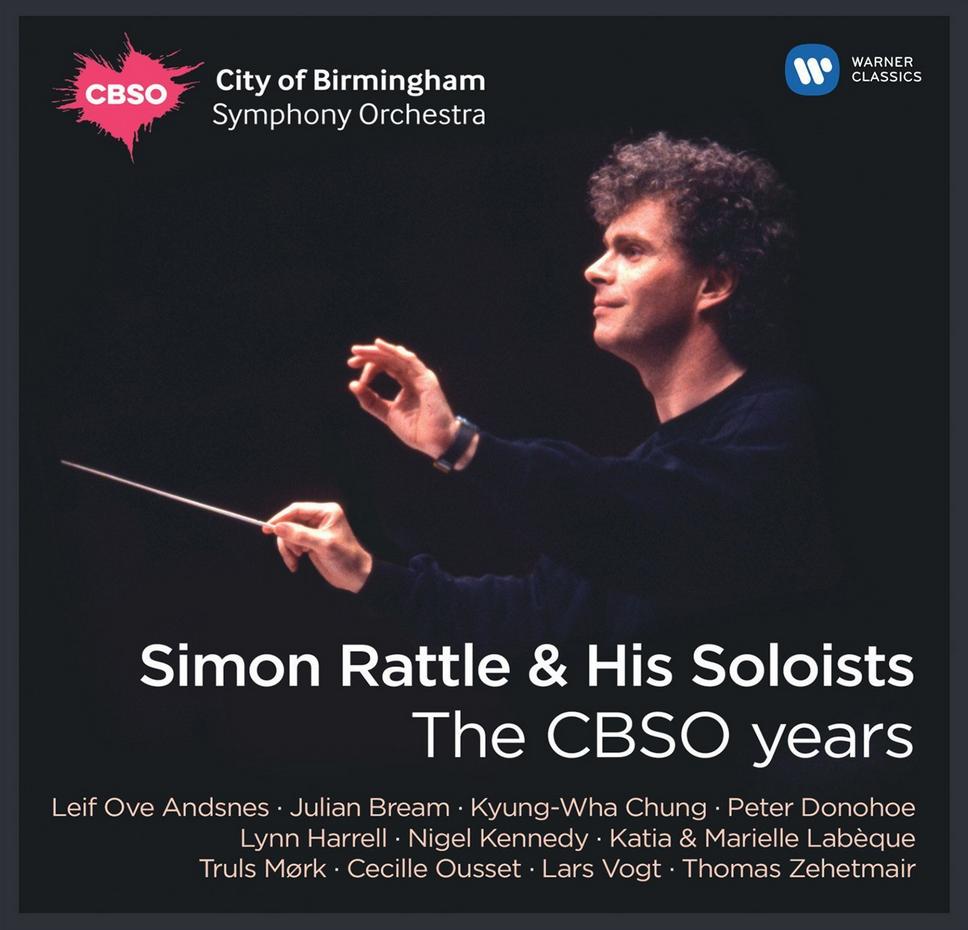 This second instalment of key recordings, made during Simon Rattle’s 18-year tenure in Birmingham, covers key concerto recordings. This box is best regarded as a lucky dip – with 26 concertos, ranging from Beethoven and Rachmaninov to Bartók and Malcolm Arnold. There are lots of terrific add-ons such as Peter Donohoe in Rhapsody in Blue, Nigel Kennedy playing The Lark Ascending, and Leif Ove Andsnes tacking on three Brahms’s Intermezzi to his excellent account of Brahms’s First Concerto. All these performances are good, and some truly outstanding, such as Kennedy playing the violin concertos of Elgar and Sibelius. What a sadness Kennedy has floated off into a weird world of his own, when he could play core concertos as well as this. Amongst other highlights, there’s another Norwegian, Truls Mork in an underrated recording of Elgar’s Cello Concerto, and Donohoe – with whom Rattle worked regularly with in Birmingham – in Bartok's three concertos; difficult music, brilliantly executed. A particular joy for me is Malcolm Arnold’s delicious Guitar Concerto, with its totally memorable, very English melody in the first movement, and then a bluesy tribute to Django Reinhardt in the second, played by its dedicatee Julian Bream. At £29 or less for 15 albums, this box is almost unmissable, even if you have these concertos played by others. No single recording ever tells you everything you need to know about key pieces of music like these concertos. And all of Rattle’s soloists have insights worth experiencing.


Best of the rest 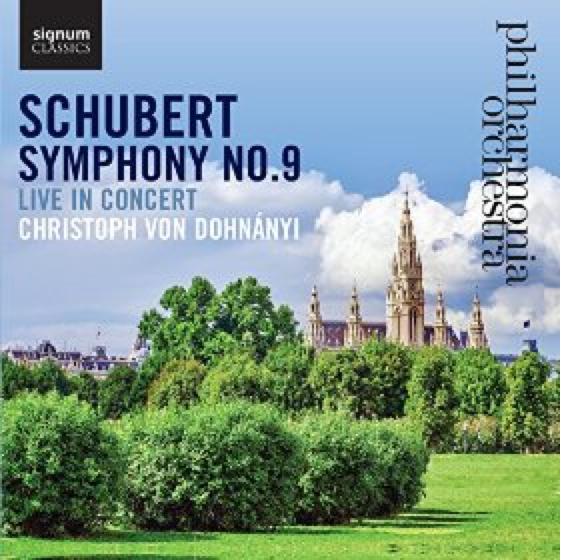 Christoph von Dohnányi, now in his late 80s but still active, has been associated with the Philharmonia Orchestra for more than 20 years, first as principal guest conductor, then a decade as principal conductor, before becoming Honorary Conductor For Life in 2008. This Schubert 9, from a live concert at the Royal Festival Hall last October, brings out the best in him, and shows that his powers have not diminished with age. This is a sane, middle of the road account of Schubert’s masterpiece, and all the better for it.  The music is allowed to unfold seemingly without effort, but always with dramatic focus.  It’s a shame no coupling is available, but nevertheless, there should be a place in every CD collection for performances that make as much of the music as this one does, and are entirely free from attention seeking. 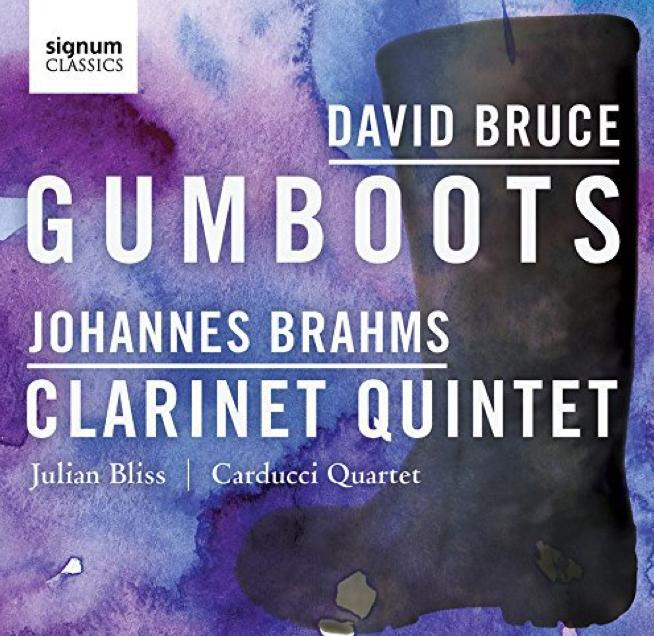 Some of the finest music ever written is chamber music, which doesn’t always get the exposure it deserves. I’m on a bit of a crusade to promote chamber music on my Sunday show, given how many terrific albums of chamber music hit my desk, so here goes with two off the wall ones. The outstanding clarinettist Julian Bliss with the Carducci Quartet presents a fine mainstream account of Brahms’ Clarinet Quintet, arguably the finest of all of Brahms’ 24 chamber pieces, beautifully recorded at Snape Maltings last May. He also finds room for the contemporary composer David Bruce’s Gumboots.  Bruce’s imagination was fired by the dances performed by African workers in the goldmines under apartheid, who were, apparently, not only wearing gumboots but also chained together while they worked. Bruce has produced a very accessible 20-minute piece, with a slow 10 minute introduction and then six often exhilarating dances. If not exactly easy listening, this is nevertheless a piece to which you will want to return, which is not always the case with contemporary music. 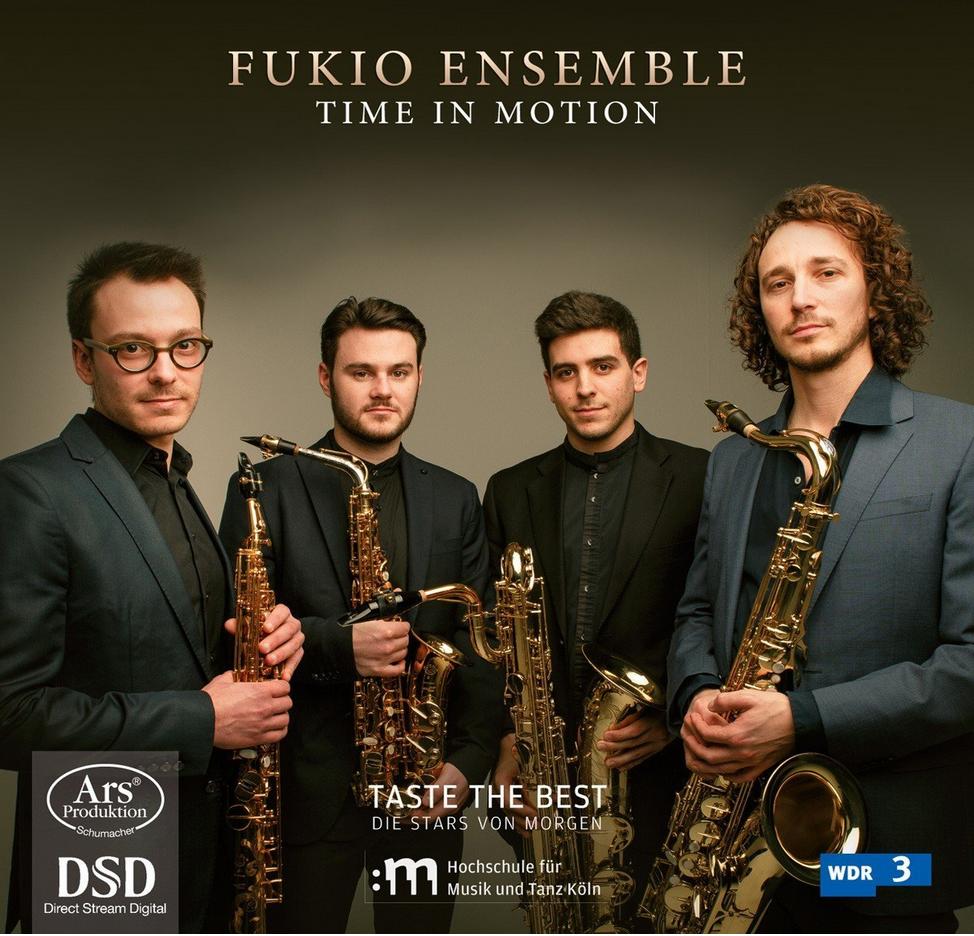 The German Fukio Ensemble are a quartet of saxophonists who do a fine job of presenting a well-known piece, Dvorak’s American Quartet, rearranged for saxophones. Stir in some contemporary music, and one of Manuel de Falla’s Spanish dances, and you’ve got a fascinating album, straight out of left field, and worth getting for the American Quartet alone. I’ve always had a soft spot for the saxophone, and am a sucker for this kind of album. More please.

David Mellor is Opera and Classical Critic of the Mail on Sunday and presenter of his own show on Classic FM, Sundays