These are the 7 types of people in an orchestra rehearsal 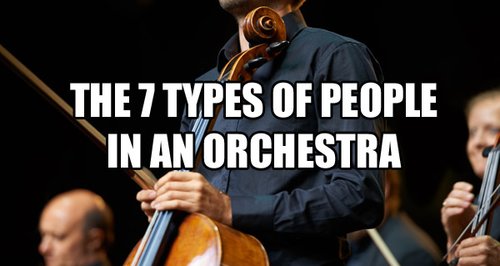 These are the definitive, absolute, heavily researched seven types of musician in an orchestra rehearsal. Which one are you?

1. The one you can always rely on to have a pencil

Seriously, who actually carries a pencil in their instrument case every single day, everywhere they go?

Tbf, SO handy when you keep forgetting when that D.S. al Coda comes around, though.

2. The one who vocally agrees with everything the conductor says

“Gosh, yes *WE* keep forgetting that diminuendo going into bar 54, don’t we?”

3. The one who never turns up until concert day

Yeah, you have to sit through ten rehearsals of repeating Ode to Joy, but they just swan in on concert day and do their thing.

You can guarantee they won’t play the diminuendo going into bar 54.

4. The one who's good enough to get into music school and gets all the solos

Oh, you’re a musical genius whose grandfather used to write for The Beatles? Kl.

5. The one who always forgets the key signature

“It’s in F SHARP major, so we play Fs as F sharps. NOT F NATURALS!”

6. The really good-looking new kid who’s amazing at their instrument

Where did they come from, and how are they so good? And why do they still look so nice after two hours of stressful rehearsals?

7. The one who’s always showing off

As impressive as it was to hear John Coltrane’s Giant Steps sax solo the first time, it would be nice if they would stop so you can all get out of rehearsal before midnight.

But in the end, playing in an orchestra is pretty cool. And when you get to impress your pals with an epic concert after all those rehearsals, it’s totally worth it.

These are the most annoying things you can do in an orchestra rehearsal.