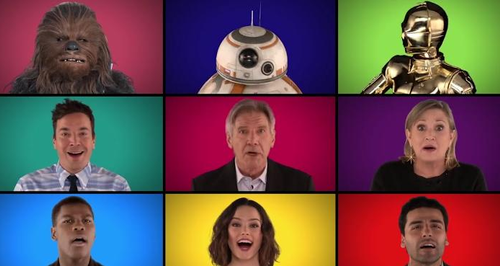 Star Wars cast members old and new joined together with Jimmy Fallon and The Roots to perform an a cappella version of John Williams’ greatest themes.

As part of the mammoth Star Wars press junket that toured the world ahead of last December's release of The Force Awakens, members of the cast performed in this neat video for The Tonight Show.

As you can see, newcomers like Daisy Ridley and John Boyega were joined by veteran stars Carrie Fisher and Harrison Ford, as well as Tonight Show host Jimmy Fallon.

You’ll have to wait until the very end for Harrison Ford’s big moment, but it's worth it.