The time a quartet decided to play Vivaldi upside-down, and everyone lost their minds 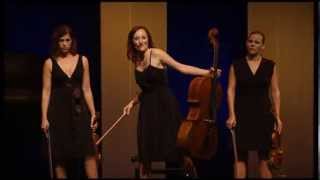 In 2014 Salut Salon's acrobatic Vivaldi, Mozart and Kurt Weill remix exploded on Youtube. And we still can't quite get our heads around it.

Despite starting relatively traditionally with a solo rendition of Vivaldi's virtuosic music on the cello, the performance soon turns into something of a diva-off between the four musicians, each attempting to enjoy their moment in the limelight in a more unusual way, including playing the cello the wrong way up, and playing the piano while lying on the stool and plucking the cello strings at the same time.

Posting on Facebook, the group have expressed their thanks to the international community, and said they welcomed letters from around the world following the release of their video.