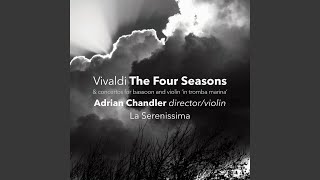 Violinist Adrian Chandler and his period-instrument ensemble La Serenissima are celebrating their 21st anniversary with a unique and extremely vibrant recording of undoubtedly the most popular and most recorded piece of Baroque music.

Chandler has previously specialised in world-premiere recordings of rediscovered works by Vivaldi and his 17th-century Italian contemporaries, combining an intelligent and scholarly understanding of the works with accessibility.

Here he also includes Vivaldi concertos for bassoon, including the famous La Notte, and world-premiere recordings of two concertos for the violin in tromba marina, a hitherto obsolete instrument that was used during Vivaldi's lifetime, and that Chandler has helped to recreate.

This is an ensemble that clearly loves Vivaldi. Their energy, enthusiasm and passion for the music shines through and casts a new light on a very familiar work.