Ever dreamed of hearing your favourite composer play their instrument right in front of you? Well if Sergei Prokofiev is your number one, your dreams have just come true…

The self-playing Steinway Duo-Art piano records a pianist’s performance in real time – and around 100 years ago, Sergei Prokofiev programmed it to record his performance of Alexander Scriabin’s Prelude Op. 45, No. 3.

The Duo-Art piano is often described as a ‘reproducing piano’, because everything you play on the instrument is recorded on a paper scroll. On one side of the instrument, a pierced music scroll rolls over a tracker bar, which also has holes in it. This tracker bar then connects, via small tubes, to the internal piano key mechanisms. On the other side of the scroll, there are four separate holes which allow air to pass through the tracker bar holes. (pianola.org)

Although other reproducing piano systems often cheated the system by creating self-perforated music rolls, the Duo-Art used a real time hole-puncher to produce a roll as the artist played.

Dynamics, however, were not recorded automatically. As the pianist played, a recording producer would be on-hand to create the dynamics on the roll, using two dials separate to the instrument.

So the composer Prokofiev added this note, to prove his was 100% real and recorded using the Duo-Art piano: 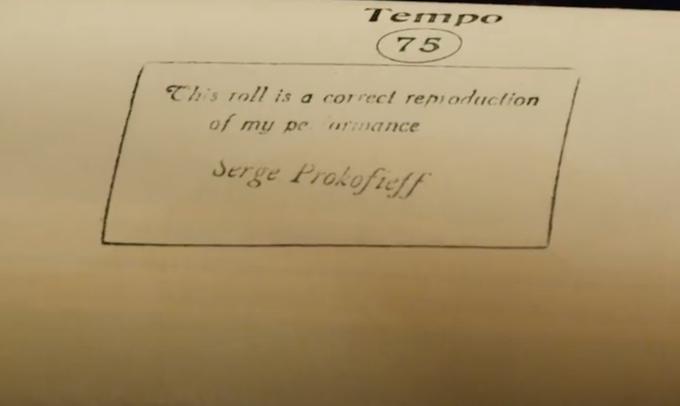 We would’ve believed you, Sergei, honest…

David Bowie's Peter and the Wolf to be reissued

Sergei Prokofiev: Symphony No. 1 in D

Prokofiev: 15 facts about the great composer