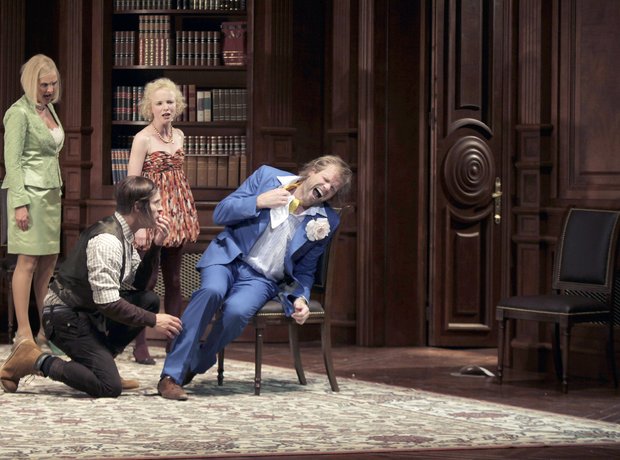 But before Giovanni can work his magic, Donna Elvira arrives and pulls Zerlina away from him. At the same time Donna Anna and Don Ottavio arrive and, not knowing he was the man behind the mask, ask Giovanni to help track down her father’s murderer. Before he can reply, Donna Elvira interrupts, shouting about his womanising ways and telling them he can’t be trusted. Her words rile Giovanni and he loses his temper. His raised voiced triggers something in Anna’s memory and she realises that Giovanni is the Commendatore’s murderer. Pictured: Marlis Petersen, Kyle Ketelsen, Kerstin Avemo and Bo Skovhus as Donna Anna, Leporello, Zerlina and Don Giovanni, the theatre de l'Archeveche in Aix-en-Provence, as part of the 62st lyrical art festival.