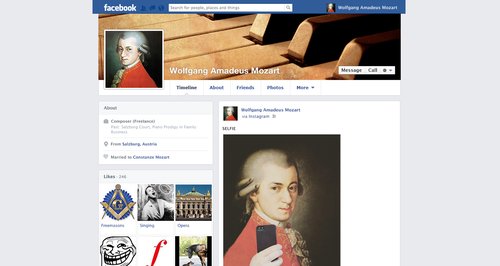 Ah, Wolfgang - he loved a gag, boisterous conversation, and enjoyed light-heartedly trolling others with his genius. He would probably have been right at home poking a bit of fun on social media.

If the world's most popular social network was around 250 years ago, how would his Facebook page have looked? We've given it some thought and come up with this. He must have excelled in terse, witty tweets too, however his Snapchats would be far too crude to share. Believe us.

Click the image below to take a closer look.