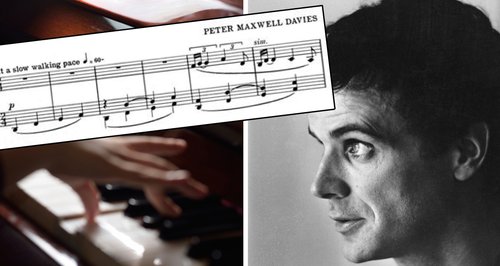 Sir Peter Maxwell Davies’ most enduring work is also his most simple - which makes it a true modern classic.

Sir Peter Maxwell Davies (‘Max’ to those who knew him well) is responsible for some truly exhilarating, challenging, exploratory and difficult work - tonally advanced and intentionally grating on the ear.

Just remember that as you listen to ‘Farewell To Stromness’:

Isn’t it just the most simple piano piece you can imagine?

But that’s the beauty of it: it’s so unfussy, so straightforward, so instantly memorable and recognisable. There’s a whole raft of theories and backstory to it, too. Written in the late ‘70s as a protest against a proposed uranium mine in the Orkney Islands (where Max lived), and one possibly fanciful theory goes that the walking bass line in the left hand is the musical depiction of doleful residents leaving their houses after a supposed contamination.

All very well, but when it comes down to it, it’s all about this:

That opening, whether it depicts those doleful islanders or not, is the simplest thing the composer ever wrote and easily the most lasting. Charles and Camilla even had it played at their wedding in 2005.

Max himself recognised this. He even told The Guardian as much:

“My little piano piece Farewell to Stromness has almost become a folk tune. People just say, ‘I like that piece,’ and they don’t know who wrote it. It gets played an awful lot at funerals these days. And that’s very unusual, for a so-called serious composer, to write a piece that people like so much, and they don’t care who it’s by.”