Watch Gershwin play one of his most famous pieces 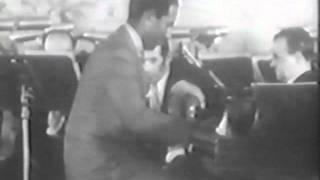 George Gershwin’s I Got Rhythm has become one of the most famous songs ever written – in this rare black-and-white footage from 1931 you can watch the composer himself perform the iconic piece.

This footage was filmed at the opening of the Manhattan Theatre in New York in 1931. The song itself originally featured in the musicals Treasure Girl (1928) and Girl Crazy (193), but became famous around the world when it appeared in Gene Kelly’s 1951 film An American in Paris.

The lyrics to the song were written by George Gershwin’s brother, Ira, who together made up one of the most successful songwriting duos of the 20th century.

But in this performance, it’s all about the music, as George shows off his new piece in this striking film from 1931.

George Gershwin wrote the music first and then gave it to Ira whose job it was to dream up the lyrics. Unlike most songs the duo worked on, most of the lyrics to ‘I Got Rhythm ’ don’t rhyme, something that Ira said was “a bit more daring” than his usual lyrics.

The song has since been recorded countless times and become a jazz standard. But surely none of those performances beat the composer’s own, fresh from the manuscript.