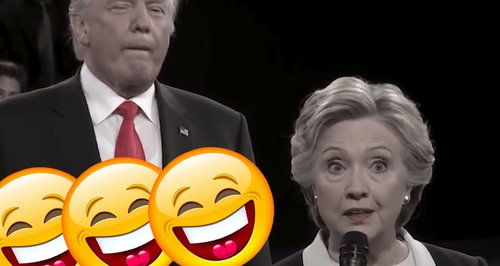 Film music legend Danny Elfman has made some shocking imagery of Donald Trump and Hillary Clinton even more shocking.

Via the legendary comedy sketch site FunnyOrDie.com, the composer has created a symphonic sketch for a montage of footage from the second presidential debate.

The footage focuses heavily on Republican candidate Donald Trump’s now-infamous performance, where he could be seen prowling in the background whenever Democrat Hillary Clinton was speaking.

As a result, Elfman’s short score treats the footage as if it were a sequence from a horror film, using atonal, screeching strings and a haunting vocal line. It’s called, not unreasonably, ‘TRUMP STALKS HILLARY’.

Danny Elfman tells us how to compose scary-sounding music

Danny Elfman: The best film and TV scores - from Batman to The Simpsons and Desperate Housewives

Danny Elfman: Oz The Great And Powerful - an album guide