LAST CHANCE: Get your free download of Beethoven's 7th Symphony 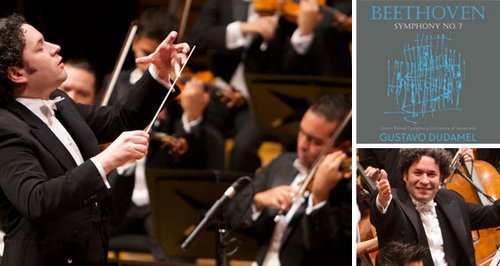 Gustavo Dudamel and the Simón Bolívar Symphony Orchestra of Venezuela are offering Classic FM listeners their brilliant recording of Beethoven's 7th Symphony. Download it for free by registering below before 23:59 on Monday 25 January.

One of the world’s most exciting and inspiring conductors, Gustavo Dudamel, has arrived in the United Kingdom with the Simón Bolívar Symphony Orchestra.

They’re playing three sold-out dates at London’s Southbank Centre before heading off next week to Berlin, Munich and Cologne.

To celebrate their European tour, Classic FM has a world exclusive on Thursday 14 January: the first play of Dudamel and the Simón Bolívar Symphony Orchestra’s stunning new version of Beethoven’s Symphony No.7, recorded in Caracas in April last year.

When the symphony was premiered in Vienna in 1813, with Beethoven himself conducting, the second movement was so popular the audience demanded an encore. More recently that movement was magnificently put to use in the film, The King’s Speech.

Listen to Classic FM throughout the day to hear all four movements from the symphony. Here's an extract:

Like what you hear? Simply register using the form below and we'll give you a link to your free download.

Dudamel is performing in Europe and the United States in the coming months:

For more dates and information, go to Gustavo Dudamel's website >